80 Years of Superman And Action Comics #1000 at WonderCon

From Superman’s past to how one of the panelists had a serious problem with Lois Lane, moderator Paul Manfort ensured that every important aspect of Superman was highlighted.

After announcing that Brian Michael Bendis becomes the new Action Comics writer after issue #1000 Paul Manfort shifted the focus to the topic on everyone’s mind….Superman’s trunks are back! Jim Lee, witty and funny as ever, acknowledged how some people were happy they were removed in 2011 in the New 52 version of Superman whereas some are happy that they are coming back. With hundreds in attendance, volunteers passed out red Superman trunks sporting the hashtag expression #TheTrunksAreBack to everyone attending the panel. Jim Lee stated that even with the New 52 he knew the trunks would come back.

The topic shifted towards the contributors to Action Comics #1000. Norm Rapmund provided some insight into how he didn’t even think he would be working on this landmark issue:

Norm Rapmund: I wrote it off. Then Dan [Jurgens] called me and asked, “what’re you doing?” and I said “just laying around. – *Laughs* – Then I finally got the pages. I got excited. I called my parents!”

Manfort then asked the panel who drew the most definitive Superman. Curt Swan was the first name that came to many on the panel. Jim Lee also gave a nod to Neal Adams. Norm Rapmund stated that John Byrne was his Superman at DC Comics. But By far, Curt Swan was the most influential artist to everyone in the room. Alex Sinclair said it best when he stated that Curt Swan’s ‘art is DC Comics. 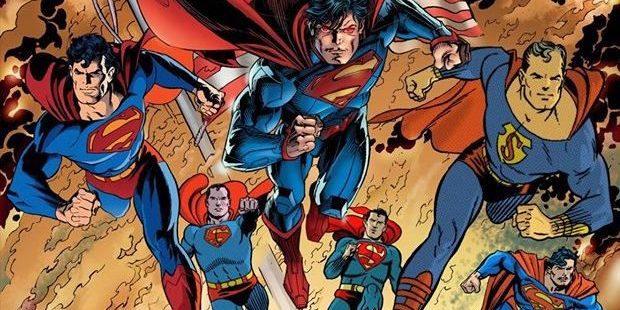 Marv Wolfman, showing why he is a legend, surprised the audience with his thoughts on Lois Lane:

It was an interesting insight into the mind of Marv Wolfman which made a number of attendees ask how many others throughout the years felt the same way?

Moderator Paul Manfort concluded the panel by asking everyone, “What will Superman look like 80 years from now?”Jason Fabok was the first to answer by saying he thought Superman would once more lose the trunks but that Batman would get them again.The other panelists had a different thought. Alex Sinclair, Norm Rapmund, Dan Jurgens, and Marv Wolfman all hoped that in 80 years Superman looked the same. Why change a classic design, was the overall thought.Jim Lee had a different thought. In 80 years, Lee hopes that Superman…is still with Lois Lane.

Regardless of how Superman changes or evolves one thing is for certain; the iconic character that started the Superhero genre is in great hands!