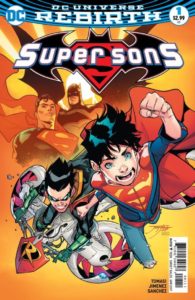 The opening prologue to this issue is downright creepy. A group of people are seemingly being held hostage on a sound stage by a demanding little snot reminiscent of Bill Mumy’s classic character from the Twilight Zone. The scene then shifts to Superboy and Robin desperately trying to escape a horde of cybernetic clones of themselves. The story then shifts again to Jon Kent spending what many would consider a rather boring day at school, dealing with bullies and trying to find a way to help his friends without using his powers. 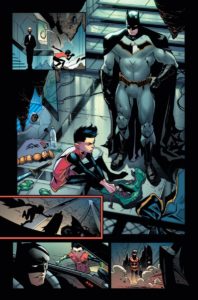 At the same time Damian Wayne is trying to understand the life of the partner he has been reluctantly placed with and decides to spy on Jon in disguise. As both boys find their own ways to live up to the responsibilities and the looming shadows of their heroic fathers, a threat emerges that calls away both Batman and Superman. As Jon goes to bed and decides how he’s going to be a better person tomorrow, Damian sees the lull as an invitation to begin his own investigation in Metropolis and he drags Superboy out of bed to help. As they attempt to break into a building in the middle of the night, they are confronted by someone they weren’t expecting and might be in way over their heads.

Have you seen this:
GeekOPedia: Hello My Name is Ian McGinty! (Part 1) 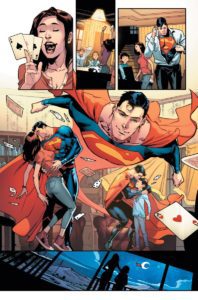 Super Sons #1 starts the way a comic like this should, with tongue firmly planted in cheek. This book doesn’t take itself seriously and that’s a great thing. I enjoy that it has fun with these two mismatched kids who have no interest in being friends or teammates with each other, but who come together in a way that is natural in their interactions with each other. I have never been a fan of Damian Wayne as a character. I find him too convenient on too many levels and his motivations for anything make my eyes roll, but he is tolerable in this book because he is forced to deal with the fact that he isn’t as perfect as he was raised to believe that he was.

The way he interacts with Superboy is well done. Neither boy is willing to give an inch, but Jon will not let himself be bullied by Damian and Damian seems to find value in the challenge. Jorge Jiminez’s artwork is frenetic and fun to look at as there is a nice flow between panels with the action scenes looking for iconic and new at once. This is a good first issue that did something that I didn’t think any comic could; make me want to see more of Damian Wayne.