Continuing from the “Superman Reborn Aftermath” story arc that started in Action Comics #977, this issue follows Superman as he revisits the major events in his life to see what changed after his encounter with Mr. Mxyzptlk.

Kelex shows Superman the evolution of his relationship with Lois, the many enemies he’s faced in his life, his “death” at the hands of Doomsday, and the birth of his son, Jon. As a huge Superman fan, it was a lot of fun to revisit these iconic moments in Superman’s mythos. But the real fun wasn’t seeing the memories, it was seeing how Superman’s memories now include events from New 52 Superman’s life.

Where the previous issue was more of a rehashing of Superman’s origin, Action Comics #978 really goes into detail to show how the life events of this Superman and the New 52 Superman have merged into one continuity. There is no longer a distinction in Superman’s memories, or even in Kelex’s archive, to show the different lives they led. And while on the surface Superman can’t see any issues with his memories, he still knows there is something missing.

Meanwhile, the mysterious figure introduced in the last issue resurrects the Eradicator. Together, now under the banner of the “Superman Revenge Squad” (not sure how I feel about that name) they bring Blanque and Metallo to Batman’s secret moon base to form a plan on defeating the Man of Steel. 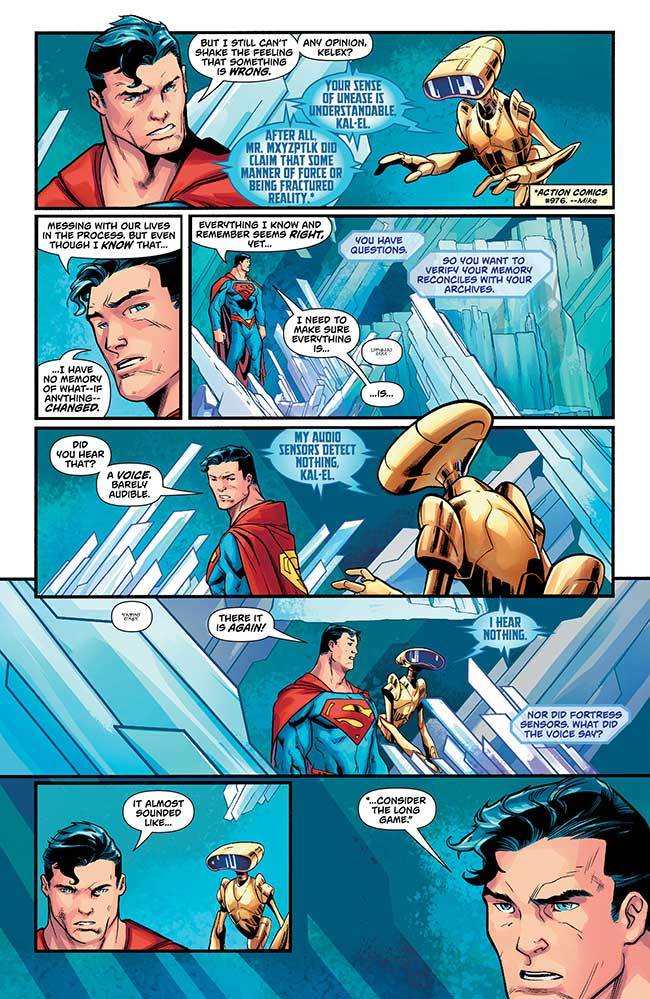 As I mentioned earlier, there was a lot of fun Easter eggs and references to Superman’s past that any Superman fan would enjoy. This is an important issue in that it gives some major hints at what really happened to Superman after the Superman Reborn event, but I was disappointed that once again I ended up with more questions than answers. I have faith in Dan Jurgens to tell a complete, coherent story, so I’m assuming he’s either building up to a big reveal, or just giving hints here and there that will eventually make sense. Churchill’s art was good, but there were some parts that were hard to follow because there were two Supermen in many panels. Sometimes it was hard to differentiate which one was the “memory” Superman, and which was the real Superman.

Action Comics #978 visits iconic moments in Superman’s history that will makes any fan happy to see, and also gives important revelations about Superman’s new life. But in the end, there are still so many questions remaining and few answers given.