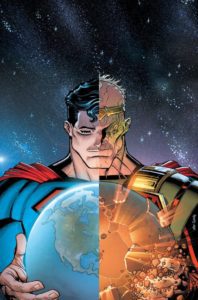 Inks by Bogdanovic and Trevor Scott

Kal El and his father Jor-El have returned to the Fortress of Solitude to discuss Jor-El’s desire for his son to abandon Earth and its people. As Clark explains that he can’t and how he tries to be an example to the people of the planet, Jor-El commands Kelex to show his son the world that he sees. As he is surrounded by images of violence, poverty, starvation and other atrocities, Kal races off to stop them, telling his father that he will never abandon the planet or its people. At the Daily Planet, a man has forced his way into the newsroom with a bomb attached to his chest, screaming about the lies and fake news being released to control people. 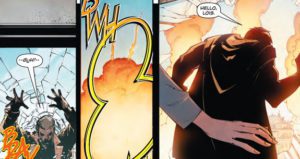 As Superman is distracted, Lois is able to send a message to the fortress and is rescued by Jor-El who decides to reveal himself to his daughter in law and grandson. Jor-El takes Jon back to the fortress and there he reveals part of his plan as a second follower of Oz enters an ominous looking chamber with the intent of destroying Metropolis.

The growing tension in this story is fun to read. Even after the arguments made between father and son, there is a sense that the real conflict has yet to take place. Jurgens knows these characters enough to write a story that is effective at making the reader ask questions about the motivations of the characters themselves. Oz isn’t a cookie-cutter villain and it is interesting to see him appeal to Clark as a father and a man who feels he’s failed his family.