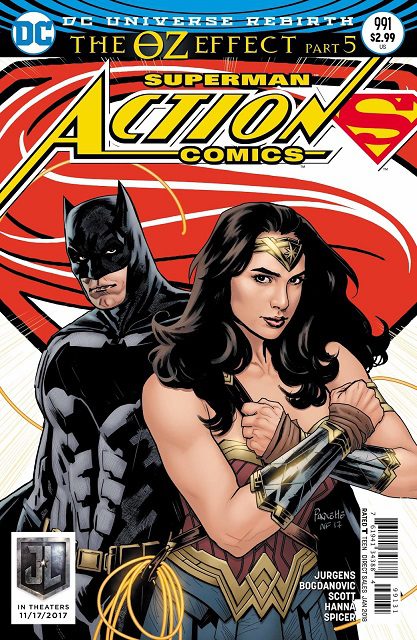 We are at the end of another story arc for Superman in the new issue of Action Comics. This fight he is having with his so-called “father” has been one of the best internal struggles I’ve seen this character go through. Superman arguing with Mr. Oz as his son watches on shows how much it matters to him that Mr. Oz is not his father. Superman has had nothing but doubt this whole time and doesn’t like that Mr. Oz has convinced Jonathan that he is family.

Superman being furious is always one of my favorite things to see because I enjoy seeing how far he will go to protect the ones he loves when the stakes are so high. He see’s the scenario as a huge endangerment for his son, wife, and the people of earth. This confrontation has finally led to the two fighting each other and it’s a special sight to see. We finally get to see Mr. Oz and Superman go toe to toe as both fight for what they believe is best for the ones they love. We also get to see some of the prison rooms again as the mystery behind this place grows with each viewing. 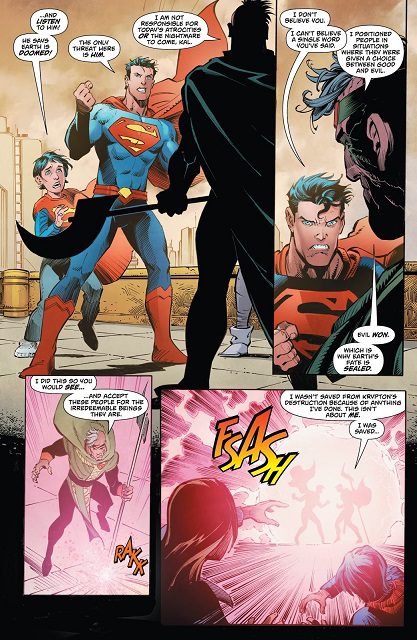 I like to believe that Mr. Oz is Jor-El so it helps make his words sound more real when he speaks of a huge threat coming to earth and you can feel how he truly wants to protect his family. Superman has been going through all kinds of conflictions in this arc with Mr. Oz and part of him wants to believe that he is his father but its undoubtedly a tough pill to swallow, and it forces you to feel for our hero. Superman can tell when he is punching him that he may be Kryptonian but believes this only because they have come to the point of exchanging blows and realizes that his father would never let it come to that and that is why he chooses to do what it takes to take Mr. Oz down.

Watching Superman find a smart way to end this conflict was satisfying as it gives us one final exchange between the two. You hear Superman being sincere to Mr. Oz and it seems that he may believe he is Jor-El as Mr. Oz begins to explain about his sickness and how he has been driven mad to despise humans because of a higher being. I truly felt a bit sad as Superman was unable to save Mr. Oz and join him in his grief as he thinks about what he went through along with the state of the earth. This is where Superman shines in being what he is about. With all of the pain, destruction, and corruption in the world, he refuses to give up, as should we.

This issue contains plenty of action and forward movement for the characters. Superman proves in this arc that he still will always strive to be the better man that society should aim to be, to Never give up and always have hope for the best in everyone.