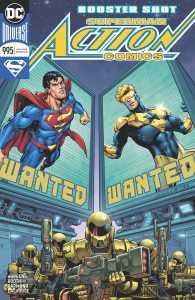 It’s Booster Gold and Superman versus an Eradicator as the two heroes find themselves possibly trapped in Gotham in the 25thcentury! What could possibly go wrong…?! Meanwhile, Lois Lane tracks down her own estranged father in the hopes to rescue him from a top secret government base, while secretly being followed by Jon…

Booster Gold has managed to protect the timeline by successfully transporting Superman away from a doomed Krypton before he could pull a Barry Allen and change everything! Unfortunately, they’ve inadvertently managed to travel through the time stream into the future with an eradicator attached to their time sphere, so there’s that to deal with! Security forces quickly detect the time travelers and waste no time in picking up the wanted Booster Gold, placing him in a cell with an unexpected blast from the past - his father! Will Superman save the man who took away his chance of uncovering the truth about his own father?!

Action Comics #995 is another fun adventure with team Superman and Booster Gold which is packed full of action as well as some touching and poignant moments. Jurgens continues his fantastic characterizations of the two superheroes as we delve into Booster Gold’s troubled past as he’s reunited with his abusive father in prison, while judgmental Superman faces a moral dilemma of whether to free the former criminal. This was definitely a deeper issue revolving around fathers and how much impact they have on our lives - even the b plot involving Lois was her trying to connect with her estranged father. There was a very emotional moment towards the end of the issue which was done so well and was a huge moment for one of the characters. 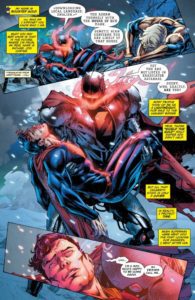 The art in this issue was fantastic with the action scenes proving a real standout! The fight between Booster Gold, Superman and the Eradicator was so well brought to life, with the reds and blues of the heat vision and explosions proving a really strong wash of the panels. Booth gives Superman a real classic look in this issue which I really enjoyed.

I’ve had a real blast reading this time travel arc featuring Booster Gold so far, and I’m really intrigued to see where Jurgens takes these two characters following the shocking reveal at the end of the issue. However, I really hope that the troubled Superman will find answers regarding Jor-El’s survival soon, as I’m getting the niggling feeling that the mysteries revealed in The Oz Effect will be left unanswered…