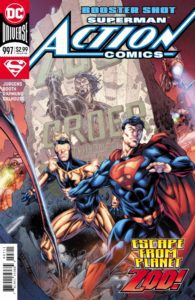 Team Booster Gold and Superman find themselves stranded a decade in the future on planet Jekuul ruled and enslaved by Zod and his family, and they’re out for revenge! How will the time travelers get out of this deadly predicament? Meanwhile, Lois and Jon manage to break Lois’ father, General Sam Lane, out of prison - saving him from his fate with a firing squad. But can the three of them escape the military base in Logamba and finally be reunited with Clark?

This issue kicks off with Booster Gold and Superman taking down the Eradicator and Lor-Zod, but SURPRISE SURPRISE it’s never going to be that easy, as General Zod and Ursa turn up with a huge vendetta to settle! With the odds really not in their favor, the time traveling duo are outgunned and outnumbered, leading to their inevitable capture. Back in Logamba and Lois manages to sneak into the prison that’s been holding her father, but quickly gets ambushed by an armed guard, leading Jon to step in and save his mum, but at the same time revealing the fact that he’s been following her this whole time! The two complete their rescue mission and successfully break Sam out, but how bad a parent does Lois look bringing Jon along to a war zone?! In the closing pages events really heat up (pun fully intended!) for both teams as they face a very dark and worrying future! 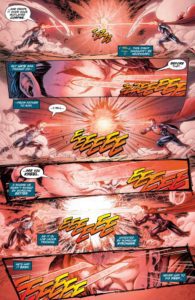 The art in this issue continues to be one of the highlights of this arc for me as Booth does action sequences so well and we are treated to some fantastic battles between Superman and the Zod family! It’s great to see the Man of Steel go up against similar strength foes and really see him come into his own, fully using his powers and heat vision. Dalhouse’s colors are once again impressive as we get a real contrast between Planet Zod’s heavy use of vibrant blues and reds to the real muted and dark blues used for Lois and Jon’s undercover mission in Logamba.

Action Comics #997 starts off feeling once again like a bit of a filler issue to the titles milestone #1000, but there’s quite a bit of a shocker at the end which has very much caught my attention. How will both teams make it out of their sticky situations? I’m very much intrigued to see what Jurgens does next - I’m sure it’ll involve some sort of wibbly wobbly, timey wimey stuff!