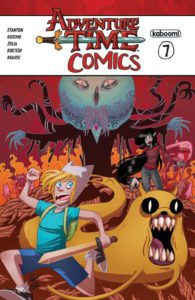 Adventure Time is, without a doubt, one of the most interesting children’s cartoons to grace our screens, and I for one, am a huge fan of its zany nature, and outright weirdness. As if having it on television wasn’t enough, it has been transformed into a comic, and has been in print for quite some time now. Adventure Time Comics #7 by Kaboom! is the newest installment of the printed adventures of our heroes, and other ancillary characters.

One thing that has always stood out with the Adventure Time comics is that any art styles are welcome - none of the artists must copy the original style of the animated show. This is showcased once again on the comic’s cover, showing a rendition of the episode “Return to the Night-o-Sphere/ Daddy’s Little Monster,” be depicting it in a somewhat anime-like style with a fantastic use of coloring, and non-black outlines.

For those who are big fans of the Marceline/Bonabelle team-up, this comic is for you. The two are sent together with Huntress Wizard by Breakfast Princess to discover the source of a problem plaguing the Breakfast Kingdom. Oddly enough, somehow, Gunter, the Ice King’s right-hand man, er, penguin, shows up with their little kitten and…well I don’t want to give away the ending, but as the title suggests, Gunter is the hero of the day. The art style is unique, once again straying from the traditional cartooning style of the television program. It resemble paper cut-outs that were painted over in an Adobe-type program. 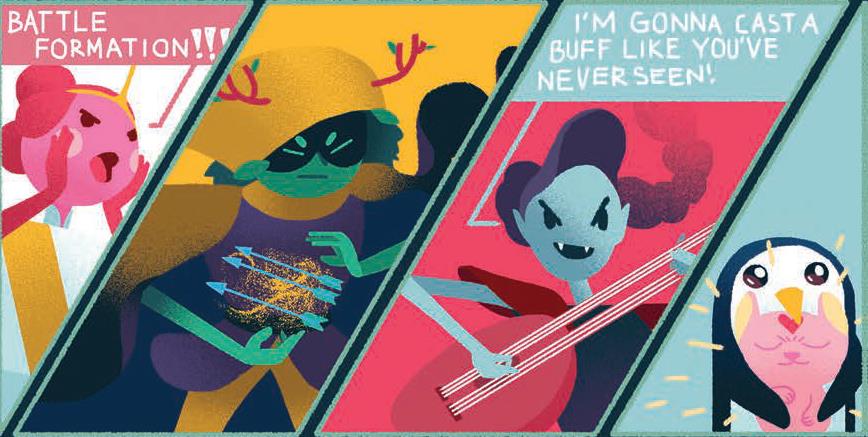 In this one page piece we see Finn traveling through Jake’s entire body, bringing the reader on a short journey through the many parts - or rooms? - that make-up Jake. It’s a one-off piece for a short joke, but the art choices made to show what is inside Jake are very fascinating.

The title is a tad misleading, hence the eventual joke, but again for fans of the Marceline/Bonabelle team-up, here they are again! This one deals with the supernatural, while the resident expert, Peppermint Butler, is away. Needless to say, Princess Bubblegum unleashes her inner Ghostbuster, utilizing science over supernatural remedies. The art style is a bit more refined in a more recognizably cartoonish way, with a flair of old fashioned comic book art. 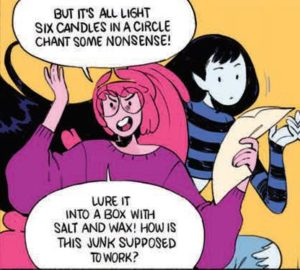 Ah, Choose Goose, the awkwardly bendy, rhyming goose who appears to have everything one would ever need at his Magical Shack. In this case, a customer has something that Choose Goose wants, and he’ll give anything to have them. Kiki’ssh nailed this character, producing ridiculous rhymes, and the conclusion left me thinking, “Yup, this is something the character would definitely do.”

This piece has none of the established characters in the Adventure Time universe, but utilizes the Adventure Time style to bring the reader into the lives of brand new background characters - hey, it can’t always be about Finn and Jake. The color scheme is kept monochromatic with different shades of red, and a light gray for contrast, lending an interesting style for this comic which centers around the complaining wails of the lead, elephantine character.

Needless to say, this is a must read for any Adventure Time fan. Or, alternatively, if you are intrigued by various cartooning styles like this reader is, this is for you too! The people at Kaboom! have once again brought forth an Adventure Time comic that encapsulates the oddness of the characters in the Land of Ooo.