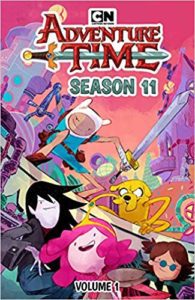 The fun will never end. How true the song remains, even after the show ended. The comics have now taken the mantle and are continuing the story of Finn, Jake, PB, Marcy, and a fully cured Simon (no more Ice King!- er, spoiler, I think?). I have yet to fully complete the last season of this amazing cartoon (I just don’t want it to end!), but I was surprised to see this comic pop-up as a continuation.

This “Season 11” contains six chapters continuing the story from where the show left off. But I’m not here to spoil it for you! The story is complex, emotional, and just as bombastic as the show, so it’s highly recommended you read this for yourself!

However, I’m here to break down what makes up the comic - minus the writing, which is great! Read it for yourself! (Can’t say that enough). The drawing style only slightly deviates from the show’s style, where it’s softer, paralleling the harsh, crisp outlines the show often portrayed. The colors were also more muted than the program and compliments the art style in this comic. Overall, the art style contrasts the story, and, well… it works! The story is heavy, complex, and stays true to the later seasons of Adventure Time where the silliness was dialed down, and the emotions and story driven plot lines ran wild. The soft art helps to contrast from that. Calming for the eyes, while the brain deals with the story.

I was surprised I enjoyed it as much as I did. I normally always enjoy the Adventure Time comics, as they are just fun romps, but this was a true continuation of the television show, and I have to applaud everyone who worked on it.

Adventure Time KaBoom
Add your voice!Join the conversation on Discord...
Join Our Discord