Adventures of the Super Sons #2 Review 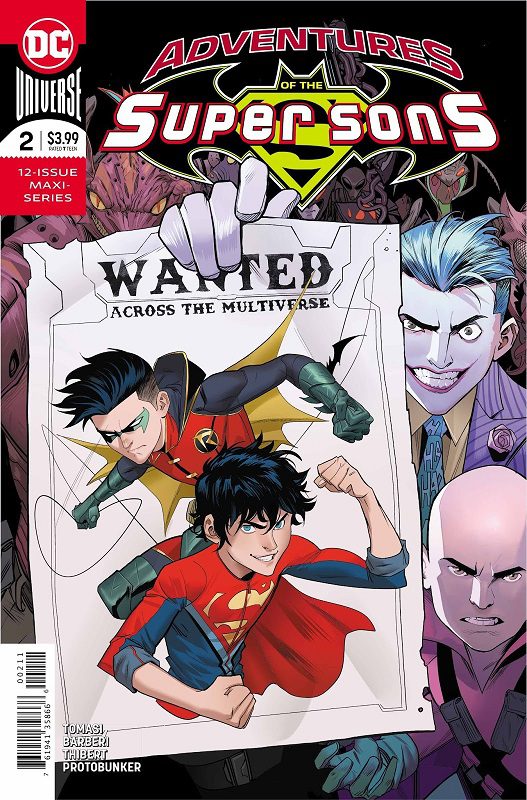 The junior Legion of Doom get a back story in the beginning of this second issue as we learn the cosmic origins of Lex and Joker Jr. With their new personas in place, the pair and the rest of their gang have Jon and Damian exactly where they want them and it becomes apparent that they have another agenda as they manage to find a way to capture them both and use the Puppeteer to get Jon under his control so that he can enter the Fortress of Solitude and retrieve an item that Lex Jr. has assured his team will help them conquer their world and many others across the dimensions.

As Jon and Damian remain powerless to stop their pint-sized captors, one of the mini villains reveals that there is dissension in the ranks and that there might be a way for them to escape and restore Jon’s powers. It’s a risk they’re willing to take, but that risk has some unforeseen circumstances for the boy of steel.

This is a fun continuation of the story that Tomasi is building with the return of Jon and Damian. Their ability to work together continues to be a highlight and it is reflected in the dialogue which is done really well. Tomasi has a grasp on these characters and I am interested in not only where he is taking this particular story, but where he’s taking these two characters themselves. He seems to be building an interesting relationship and friendship between the two of them. One that is different than the one their father’s share.

Barberi delivers some great art in this issue as well and everything has a great sense of movement and motion in how it complements the story that Tomasi is creating. Great visuals throughout help keep the story suspenseful as well as fun.