Adventures of the Super Sons #7 Review 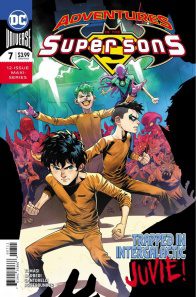 The Super Sons, Joker Jr, and Rex Luthor have been thrown into the most ruthless space juvie in the galaxy. Jon is separated and placed in a location devoid of light and Damian is determined to find his firend and escape by becoming the biggest badass on the inside.

He takes to the skies to track Joker Jr making his presence known throughout the prison. He makes his reputation among the inmates as Rex tries to convince them to emulate the villains of Earth.

When Robin finally tracks down someone making weapons for Rex, he gets his best lead yet to finding Joker Jr as well as the missing Superboy. His quest might come to a premature end as Rex is making allies of his own including a female Grundy.

Tomasi delivers another fun issue of this series. The dialogue is great and the tone that Damian takes goes a long way toward making him a more engaging character. Damian has some great moments in this issue, but also is allowed to have moments of vulnerability. The story moves at a good pace and the rising action is well done. The issue builds to a satisfying and fun conclusion.

The art is amazing. Barberi draws these characters beautifully and there are some great details in both the characters and the backgrounds.