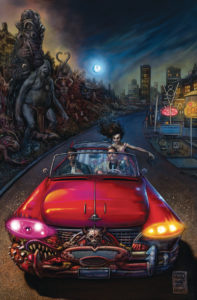 Well here we are back in the crazy world of Neil Gaiman’s American Gods and things aren’t much clearer. Shadow is introduced to some more interesting and frankly scary characters, including one who is a little bit too fond of the old Sledgehammer for my liking. Certainly for the first time in the series you see Mr. Wednesday loose his edge a bit and expose a side that…well…is more human rather than whatever the hell he is meant to be.

Now personally I felt this issue was pretty boring, not a great deal of action and a backtrack into an Irish ladies history dragged the comic on for a bit. I suppose when Neil was writing this he wanted to build the characters up properly and give them a good foundation but it can feel irrelevant to the story overall. 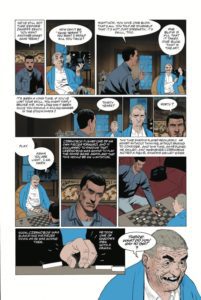 In regards to the TV series, it seems to be running quite well alongside the comics without too many differences that may throw the reader off if they were to watch it on TV. One thing I do like about the American Gods Comics so far is the alternative covers, One can look like a Meat Loaf Album and the other can be the total opposite with collage of different art styles and color.

Its to be expected that you get the odd slow patch in a series of any type but I just wasn’t expecting it this early on in the comics and for it to practically take up the whole issue just felt disheartening, maybe a quickening of pace at the end wouldn’t have gone a miss. I’m pretty sure the next issue will be back to its normal mind-bending characters and events but for this one, it lacked its normal suspense and dark humor, pray to God it returns in number 5.