An Agent of Darkness Destroyed in Outcast 25 Review 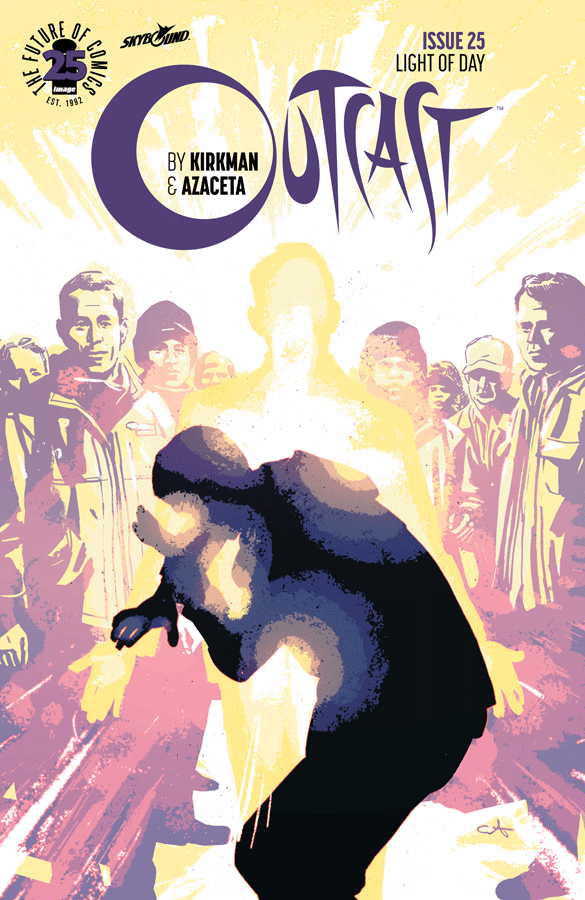 Robert Kirkman! Thank you. It took twenty-five issues, but Outcast is finally turning into a great comic. (And in celebration of the twenty-fifth anniversary of Image Comics, this issue is only twenty-five cents!) I kept reading even when I wasn’t fully satisfied, because it always had all the right elements—interesting plot, main characters, and art, but the story just dragged every month. The comic has had a pacing problem since day one, but little by little, it’s starting to pick up. Kirkman is finally bringing some substance into the writing. He even added a new character to the story, which will add some much-needed dimension. The writing is finally catching up to the art in terms of quality. Paul Azeceta’s line work and Elizabeth Breitweiser’s coloring are excellent and had redeemed the snail-like pace for many, many issues. 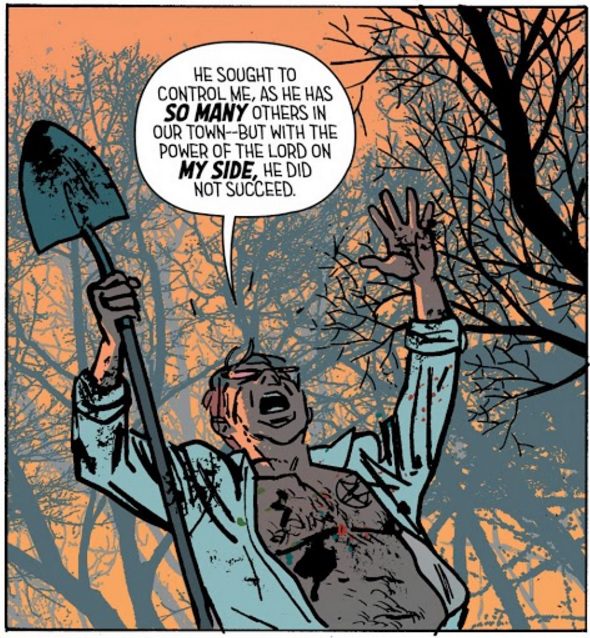 As we saw at the end of issue 24, Reverend Anderson got a little too stabby with Sidney. I mean, he killed him; he really killed him. Kyle, who has reunited with his daughter and ex-wife, doesn’t want any part of it. He wants to get as far away from it as possible. First of all, it’s interesting that Kirkman had the Reverend break down and murder Sidney. Second, what’s even more interesting is Anderson’s reaction: “I have rid the world of an agent of darkness hell-bent on destroying us! I have not committed the sin of murder! This was no man.” He doesn’t believe himself to be a murderer. However, if Sidney was just that—a vessel—where is that “agent of darkness” now? Who will be the next vessel? I can’t wait to see what Kirkman has planned.

The best part of the issue is the new character, also an Outcast, who Kirkman reveals to be Kyle’s father. We were introduced to him at the end of issue 24, and in only two issues, he’s already one of my favorites. (Kirkman better not kill him off!) He has some badass demon-fighting skills, and seems to know exactly how to defeat them—quickly. However, as he told Kyle’s mother in issue 24, to save the world, he has to put Kyle in danger. I’m definitely looking forward to learning more about this character and where he’s been and why. I’m also glad we’re finally meeting another Outcast. Kirkman teased it for so long, so it’s about time.

This issue had tons of action and intensity, and Azeceta and Breitweiser’s artwork shines. Breitweiser’s muted colors work perfectly for the comic. The world the characters are living in is getting increasingly darker, so the color palette is a wise choice to complement the theme. I always enjoy Azeceta’s close-ups of characters’ expressions—they’re getting creepier, as we know that most characters aren’t themselves anymore. The fight scene between Kyle’s father and the people at the gas station is great—he totally takes control of the situation and looks strong. He’s drawn without even an ounce of hesitation or weakness. The panel with him slamming down Scott with a WHAKOOM is one of my favorites. Through the artwork, we’ve learned he’s not someone to mess with. The cover features Kyle being blinded by a bright figure walking toward him, with the people from the town in the background. With the issue titled “Light of Day,” perhaps the figure represents Kyle’s father. He’s finally showing himself to help Kyle and save the world, and Kyle finally has hope.

Like issue 24, issue 25 is great. I’m hoping Kirkman keeps up the pace, and we continue to learn more about the merge and the Outcasts now that Kyle’s father is in the picture. It’s always a good sign when a story makes readers question and theorize—as they’re eager to know more. I’m finally at that place with Outcast. Well done, Kirkman.