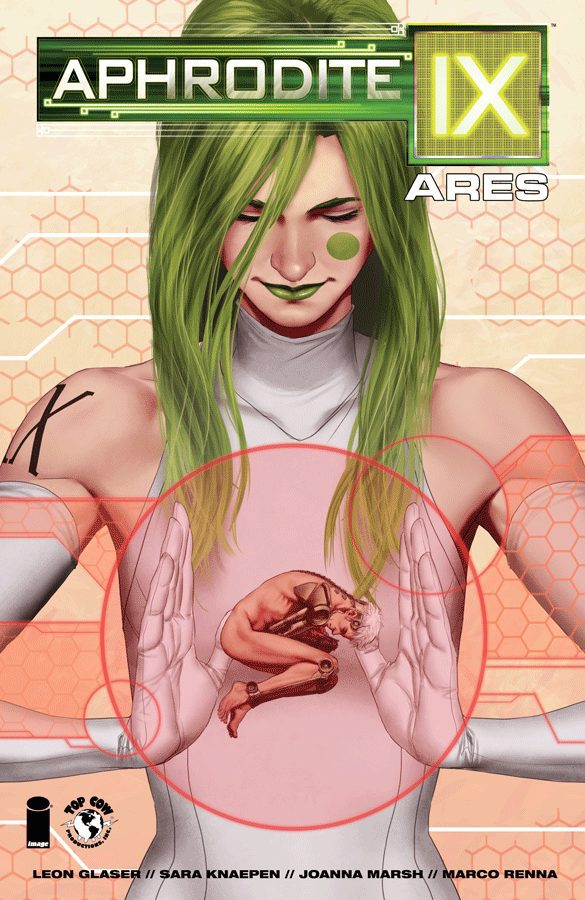 This one-shot collects two short stories set in the Aphrodite IX universe. Both feature the creators that won the Top Cow 2016 talent hunt. The mere fact that this is the first offering from these creators speaks well of the future of the industry.  Let’s start with the first installment.

Writer Leon Glaser takes the reader inside the mind of Rust, a low-level cyborg caught in the endless war that is the future. Rust gives us insight into what it might be like if humanity used technology to remove human frailties like sleep and dreams. In our race to reach immortality, we cut corners and possibly remove the very things that made us unique, to begin with. Glaser’s narrative is thought-provoking and multi-layered. Rust upon meeting Aphrodite is taught the meaning of the word “dream”. The rest of the short story Rust relates dreaming to the sense of infatuation and desire he felt towards this beautiful freedom fighter.

While not breaking new ground in the realm of futuristic sci-fi there is enough heart in this story to make it a worthwhile read. With a little more professional seasoning Glaser will be ready to handle the monthly chores of an ongoing title. There are still a few kinks to work out, his dialogue came off stilted and choppy; his over-all plot was too straightforward and predictable… not that there is too much wrong with that in a one-shot like this.

Have you seen this:
DJINN HUNTER # 2 (REVIEW)

The art side of the first story fell to talent hunt winner Sara Knaepen.  Her comic style falls within the vein of Steve McNiven and Raff Ienco. Her facial expressions and anatomy were on point. Her storytelling was very strong and fit the issue like a glove. I am expecting big things from this woman in the future. Top Cow, as usual, has its finger firmly set on the pulse of great comic art.

That being said I don’t feel that Knaepen was challenged enough in her debut. The panel layouts were simple, the story was packed with action and there were only a couple of moments when the artist was allowed to show her more subtle storytelling muscles. There was a short series of facial expressions that rivals that of the legendary Kevin Maguire.

The second half of the issue was devoted to a short eight-page story that was focused on character development and “a day in the life in New Cythera”. The narrative was quick, the conversational dialogue had better patter, and the art was closer to a traditional comic style.

Writer Joanna Marsh and artist Marco Renna gave us their best offering in the limited amount of space that was afforded to them. It sometimes takes real creative guts to go for a quiet moment in a short story; to allow the characters to breathe instead of trying to jam in too much action or backstory. This quick glimpse into the character’s lives came off as organic and natural. Marsh took a gamble and it paid off beautifully. The art is at an industry standard that could be found in any modern comic on the rack. Renna is pro ready and it shows.

I trust that all this new talent to the industry has already been scooped up by other creators to get involved in other projects, but it’ll help me sleep better at night knowing that the next generation is so damn talented.