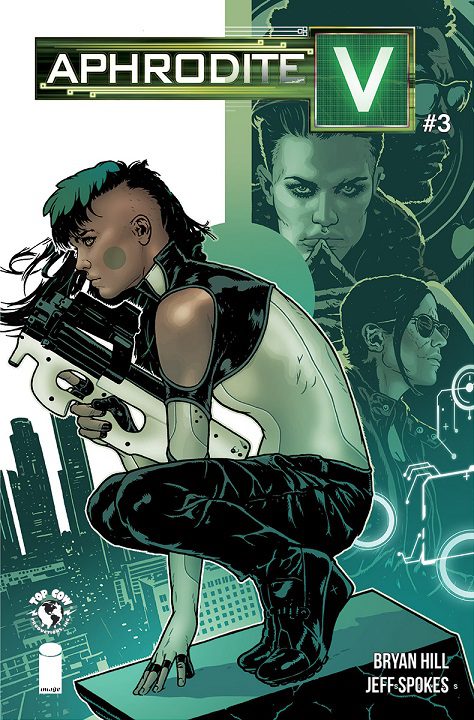 The new issue of Aphrodite V is here and it continues to keep its momentum up as we dive into the mysteries of Basilisk, the machine God that seems to have everyone really worked up. The scientist Martin takes a back in the issue here as we’re mainly hanging out with Aphrodite and Hui-Men as they go out to question Caitlin Campbell who runs the company that competes with Martin and is believed to be a part of the assassination attempt on Martin. I love how this issue shows how great that Aphrodite and Hui-Men work together. Their personalities really blend well together as they’re both very focused on whatever task is handed to them. There’s some really great writing done here that has it’s reader really grow to learn about these characters, even Caitlin is written very well. Her spot in this issue was handled very well.

She shows that she has power but she’s not stupid on how to use it. She can be very twisted and I like how it’s her greed that really becomes her downfall. The action in this issue is played down but there’s one particular moment that stands out very strong and it’s definitely my favorite part of the entire issue. The last two issues really had the gas going and put a lot on your plate to take in. This issue definitely felt like it was trying to take its time and it really worked. The pacing of the issue moves the story well enough and by the end, you just want more as Aphrodite continues to move forward its story.

The art in this series is very strong with its use of green, black, and red. It’s very stylistic and I think one of the reasons I personally love it is because the images look like its being filtered like in certain films. This issue I believe has done the best use of its style so far and I hope that it continues to always look this great. There’s also just some really great work in details on things like their clothes and muscle groups of their bodies. It all just really sells on the realistic look that they’re going for.

Aphrodite V is definitely a comic any fan of science fiction and action should check out. The storytelling continues to go steadily uphill and the stakes seem to get larger and larger.   With its awesome main characters, I find very little to skip this issue.