Having just completed a successful run of dates across Eastern Europe on the “Will To Power International Tour”, extreme metal giants ARCH ENEMY are back with another ripping single from their recently released album, “Will To Power”, with the music video single for “The Race”. 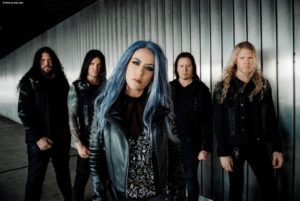 Founding member Michael Amott commented: “This was actually the last song written for the ‘Will To Power’ album. Listening through all the material we had up to that point we agreed that the album needed one more song that would be a relentless and fast paced counterpoint to some of the more epic compositions we already had. We sent Alissa the music and she came up with a thought provoking set of lyrics with an intense vocal arrangement that complemented the music perfectly. We’ve been having a blast playing this song on the current tour and we had our video director Patric Ullaeus come out to capture the mayhem at our recent show in Helsinki, Finland… Enjoy ‘The Race’!”

Showcasing their “trademark blend of heaviness and memorable melodies” (Loudwire), ARCH ENEMY‘s latest critically-acclaimed effort, “Will To Power”, is out now via CENTURY MEDIA RECORDS worldwide. Marking the first recording to feature legendary guitarist Jeff Loomis (Nevermore), “Will To Power” was co-produced by Amott and drummer Daniel Erlandsson while being sent to Jens Bogren (Opeth, At The Gates, Dimmu Borgir) for mixing and mastering. Get your copy here.

ARCH ENEMY will bring their “utterly enchanting melodies and savage riffs” (Metal Injection), to audiences across North America later this month as they join Trivium for a co-headlining tour from October 27 to December 6 featuring support from While She Sleeps and Fit For An Autopsy. The band will continue to spread their power in early 2018 as they have announced a Winter tour with Wintersun, Tribulation and Jinjer across Western Europe. Full dates can be found listed below. Tickets are available at www.archenemy.net.

Have you seen this:
Zack Snyder's 'Army of The Dead' Gets Its First Trailer
Arch Enemy metal monday