The twisted web of deceit and mystery deepens as Jennifer- the vindictive daughter of a U.S. Senate hopeful, sends Richard to recover an old childhood friend, who is now a junkie and has double-crossed the Aryan Brotherhood. Richard is caught between the Brotherhood, the F.B.I. and his need to get Jennifer to come clean about the death of a fellow agent who died at the hands of her pro-white power father.
This is the closest offering DC has given fans of Brian Azzarello and Eduardo Risso’s 100 Bullets. The level of complexity and intrigue are the same, and Risso’s unique art style is even mimicked in Fernandez’s, whose constant use of heavy shadows, of negative spacing, and great facial reactions seems to pay homage to the lauded Vertigo artist.

Fans of crime dramas may have found their new favorite offering in Hill’s work, but I am still not totally sold on the series and its brilliance. I need a few more chapters to decide if this comic is as good as it appears to be. 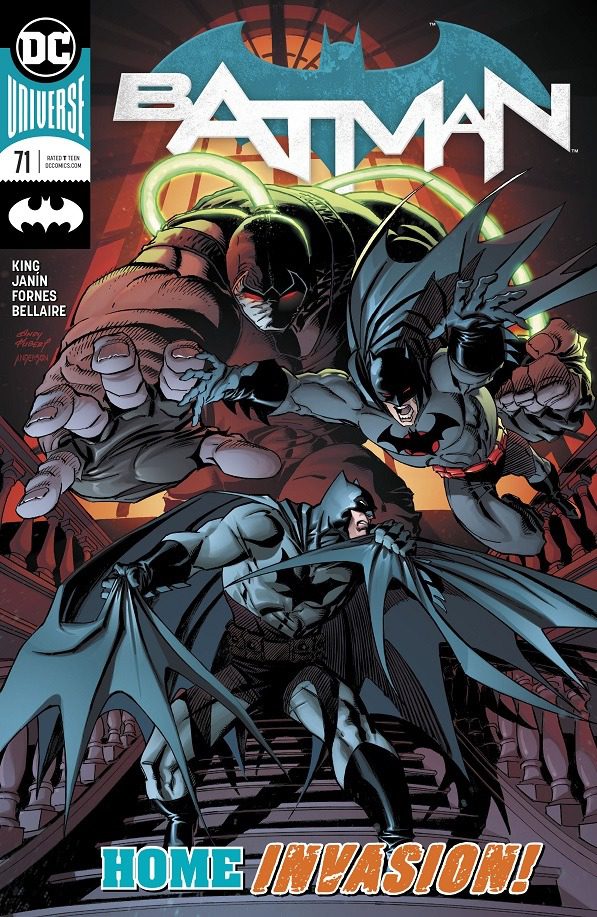 Batman puts out an emergency call to the entire Bat-Family, but what they discover when they arrive is worse than any of them could have imagined as Bruce has suffered the deepest injury of his crime-fighting career; a broken mind.

Aquaman goes on a spiritual journey where he runs into an immortal being known as the Mother Shark. Her job is to consume the souls of this world and collect their memories, but she has saved Arthur and revealed his true self, and as the memories return Arthur is given one last critical piece of information; the identity of his killer. You won’t believe this twist ending!

This issue has a little something for any Aquaman fan out there, with flashbacks galore to previous incarnations of the old fish head. What starts out as a crazy drug trip ends with an endearing reminder of why Aquaman is one of the most beloved characters in the DC canon. The art in this installment is fantastic and the writing by DeConnick is on point. This set up for future issues will surely have fans coming back.

This is one of the best hero origin issues I’ve read in a while. Naomi has to spill the beans about her powers, her parents, and everything else that has happened in the last few issues to her best friend, Anna. If you’ve slept on this series and are late to the party, this is a great issue that will bring you up to speed in no time.

Anna is a new favorite for me; Bendis’ ability to write witty and dorky sidekicks remains intact as he stretches his legs with a new character and new opportunities at DC. There is an energy and hopefulness to this issue that is infectious, you immediately find yourself rooting for Naomi as she tells Anna her origin.

Then there is the artwork. BOY HOWDY! Jamal Campbell can draw y’all! He illustrates in a style that reminds me of Steve McNiven, and yet carries his own unique flair as well. This is an artist that I feel fans of DC will be seeing a lot more of in the coming years. 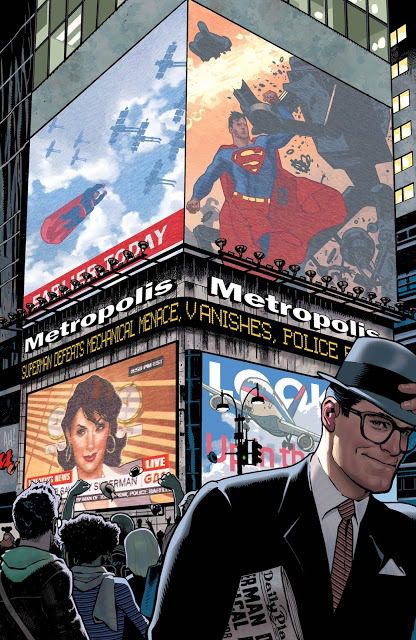 Rogol Zaar returns in the midst of an epic space battle; beautifully rendered by the talented hand of Ivan Reis. But Zaar doesn’t return alone, as he brings back the constant thorn in Supes side, Zod. As the forces of darkness gather, the house of El is going to be pushed to the limits in upcoming issues. The highlight of this comic was seeing Jon, AKA Superboy, face off with Zod. The results were unexpected.

The team starts to implode after the apparent death of longtime nemesis Deathstroke. Its friend against friend as the Titans butt heads to decide what happens to the team next. Emotions run high until one of the Titans is surprised by the return of her daddy. The main man cometh. 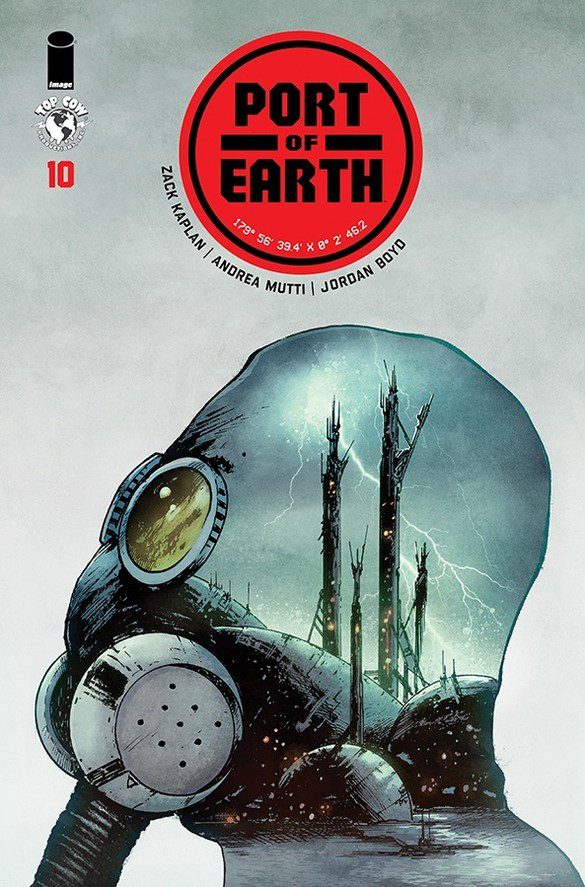 There are so many ways that this series is a perfect example of how Sci-Fi is supposed to be handled. Not only are the fantastical elements of this series attention-grabbing just based on their own merits, but you start looking at the subtextual commentary… whew! This one has layers upon layers of meaning hidden within.

There is great political intrigue that could be compared to the current Presidential cabinet’s stance on immigration. There is a commentary about the current state of healthcare, there are questions of morality; does the well-being of a few outweigh the safety of the whole? When I say that there is a lot here to digest I’m not kidding. Those examples are just scratching the surface.

Mutti’s artwork has its highs and lows. The artist seems more comfortable drawing aliens and wide panoramic shots than focusing on getting the humans of the story to look right. Human anatomy in certain panels seems wooden and stiff and the way he draws men at times look identical, only the skin coloring by colorist separates who is who.

I’m not here to knock Mutti’s hard work. The artist has a ton of talent in the areas that he is obviously interested in, but you can see where his focus wanes when it comes to talking heads and exposition heavy panels.

Still, there is more than enough here to enjoy and if you’re a fan of well-done Sci-Fi you should definitely give this series a try.

This series starts off with the unexpected and just goes off from there. Ellis introduces us to Mike Blackburn, an off-world scout, who has been captured by the local law enforcement of a planet that was colonized by humans over a hundred years ago. The interrogation doesn’t go anywhere near expected and Mike is on the loose looking for a way home. It’s during his jailbreak that he frees Grace Moody, a local resistance fighter and wanted murderer. It’s their mad dash to Cemetery Beach, Mike’s landing zone and an escape route, which sets the scene for this series.

This is somewhat of a departure for Ellis who is usually known for his big chunks of dialogue, slow pacing, and world building. Cemetery Beach is a flash bang of chases and action that rarely lets up. In fact, there are so many pages devoted to the initial escape sequence that it begins to feel repetitive and monotonous. It’s like you’re getting too much of a good thing. There are numerous pages without any real dialogue at all, just sound effects, screaming, and gunfire.

The action is wonderfully provided by the talented Jason Howard, who has worked with Ellis before on the Image series Trees. Here Howard stretches his artistic skills to the limit by getting to draw chases, action, flying vehicles, monsters, and so much more. There really is never a dull moment in this series.

For those of you who need a shot of adrenaline in your comics, or love the action/adventure genre, then this trade is a must own.

I’m going to keep this review simple and straight to the point.

If you ever wanted to read a story about teenagers who get sucked into their D&D game to become the personification of their characters, only to be spit back out into the real world two years later without an explanation as to where they went, and to reunite decades later as adults and return to the same fantasyland again, to fight their friend they left for dead, who is now the new dungeon master… then this trade paperback is for you. Got it? Good. 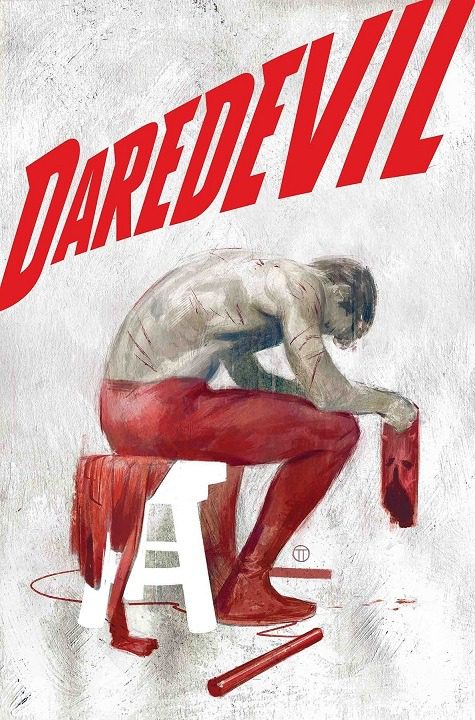 I’m staying out of the War of the Realms nonsense. If you’re looking for those reviews you’ll have to search elsewhere.

Zdarsky is putting hornhead through the wringer and the results are glorious. Trying to pay a personal penance for an accidental death earlier in the series Matt Murdock is pushing himself to the breaking point before his friends or the law take away his ability to make wrongs right. But Matt is going too far, taking on the actions of a man with a death wish. Enter some tough words from good a friend that leaves Matt giving up the mask, but is it for good?

This is the kind if gritty action story that Daredevil and his fans thrive on. The character shines best when backed into an impossible corner and has to fight his way out. Visually that fight has never looked better; Checchetto is absolute gold and Marvel should never let him go. Every page was stunning! This might be one of my new favorites coming out of Marvel right now.

This issue is part 5 of the Hunted storyline and things are just getting good as Central Park is cut off from the rest of the world, it’s filled with all of Spider-Man’s greatest foes, and all of them want him dead. IF you haven’t picked up this storyline yet it’s shaping up to be a great one. Peter is always at his best when his rogue’s gallery is allowed to take the spotlight and in this offering, they are front and center.

Spencer is doing an excellent job of keeping all these characters moving without getting too mired down in the details, but still has enough presences of mind to give fans great moments like the situation in this issue where Peter is locked up with the Lizard. I won’t spoil too much, but the way in which the two escape is dramatic and satisfying.

All of this high octane drama is perfectly captured by Sandoval, who is putting in overtime on the art chores on this storyline with so many characters to draw. My personal favorite is Sandoval’s depiction of the Vulture, who looks like a crazy old madman.

Don’t sleep on this cross-over as it is actually delivering a great story.

This series started off as one of the best Hulk related titles to come out in the last decade. Now as the series has gone along the wheels are starting to shake and threatening to fall off. I love Al Ewing’s writing, and I have been a fan of Joe Bennett’s artwork for years, but this issue just felt sloppy and confusing. The story lacked the same punch and magic of previous issues and the art was a major drawback. I REALLY hate to say this, but I would pass on this issue unless you’re collecting the entire run. Sorry gang, I really do love the creative team’s work, but it ain’t working in this issue.

Guardians of the Galaxy #5 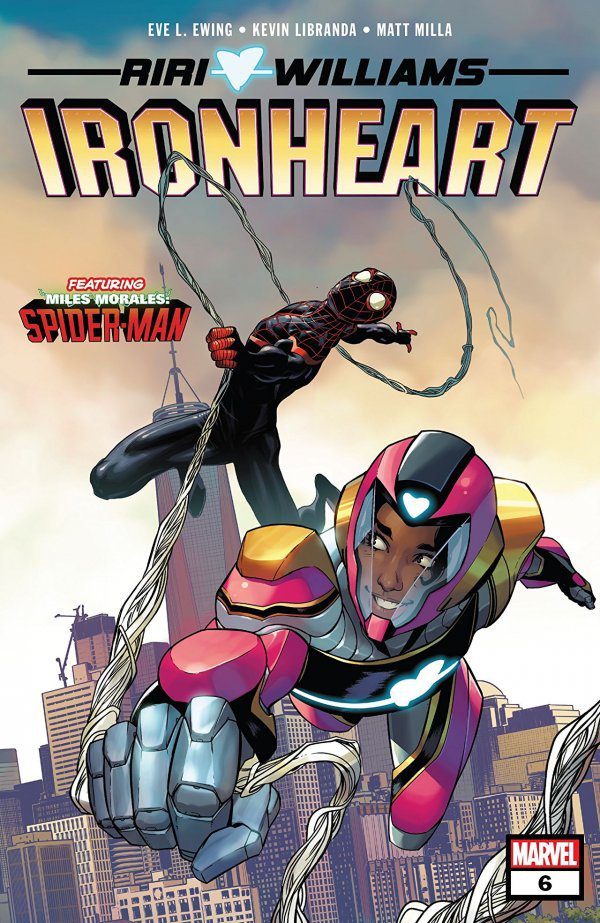 Wow! This issue was an unexpected surprise and one that is too good to spoil. If you like the space side of Marvel then this is the ultimate lead-in to the return of everyone’s favorite evil Titan. The story and art on this one is top notch. Don’t pass this issue up!

There is a great time travel tale in this one featuring a cameo from Miles Morales. This issue is just fun and well-drawn. I haven’t really been paying much attention to Ironheart but after reading this issue that’s going to change.