The fifth season of the popular CW series has Oliver Queen protecting Star City in one of the most difficult ways possible, as the Mayor. After defeating Damian Darhk at the end of the fourth season, Team Arrow is seriously diminished with both Diggle and Thea venturing out on their own. With just Oliver and Felicity to keep the city protected, a new group of vigilantes emerges to help protect the people, but their inexperience might do more harm than good. Oliver must find a way to make them heroes as a new threat emerges that threatens both Green Arrow and Mayor Oliver Queen as well. 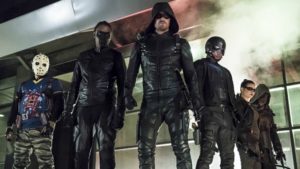 Arrow: The Complete Fifth Season will be available to own on Blu-Ray or DVD September 19, 2017

Arrow Stephen Amell the CW
Are you an Insider?News, reviews, & updates are just the beginning.