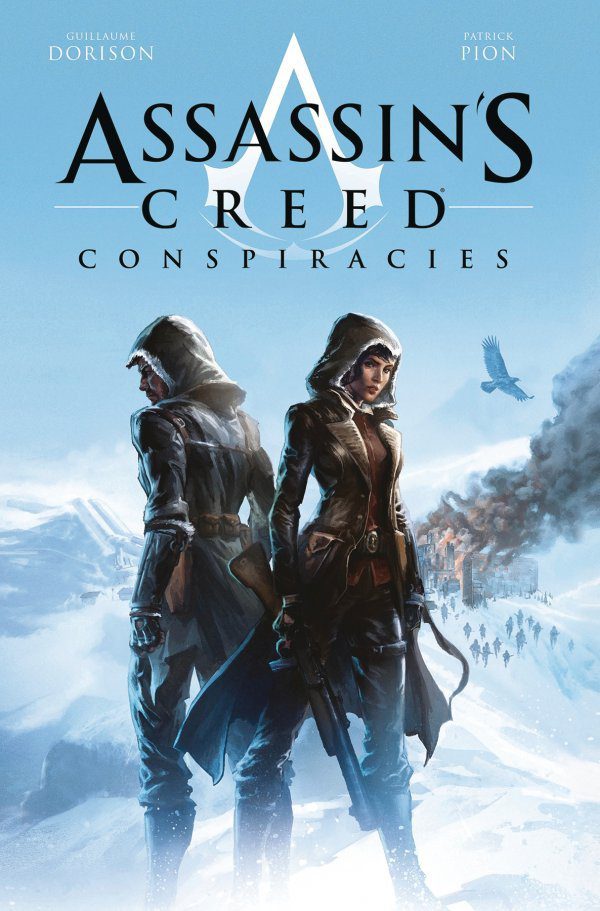 The first issue gave Eddie Gorm a decent background and got into the series’ plot. It set the stage but also got the ball rolling. So there was no lull, but we got an idea who the players were.

Assassin’s Creed: Conspiracies #2 just had way too much going on for one issue, double or not. It was overwhelming. This would’ve been much better served as a three-issue series, with the double issue still kicking things off.

That being said, Assassin’s Creed: Conspiracies #2 is still good. I just think it would have been very good had Titan split the second half of the story. And they had the perfect spot to do it when Gorm and Julia Dusk killed Kramer, the Obergruppenfuhrer. (Sidenote: Obergruppenfuhrer, not exactly an efficient title in terms of the actual word length. Can you believe this was an actual title Nazis gave to members of the Third Reich?)

On top of everything going on in the past with Eddie Gorm, we have his descendent Maxime Gorm in present-day Madrid dealing with the Alders and their homemade Animus. The Alders are trying to find the Apple of Eden to put the finishing touches on the bleeding effect to help their Amnesiac daughter, Elisa. Oh, and it looks like Elisa’s doctor is an Assassin. And in all of this, we learn the Assassins became bad guys in the past, and it looks like there are still some bad apples (sorry, couldn’t help it) in the future.

For all we know the entire Order of Assassins could have turned. It’s too much to handle in one issue, even if it’s over 52 pages.

This is all ignoring the fact that five seemingly important characters died this issue, too.

That action, however, was awesome. Well done by Patrick Pion. (And he apparently got my request about more Hidden Blade of Aguilar!)

The more I think about it, I think this could’ve been a six-issue mini-series. Maybe Guillaume Dorison gets a chance to do more with Maxime and Elisa (who kind of looks like Julia Dusk) in the future. I’d definitely read that if Titan gave it the green light.

Just don’t try to do everything at once. Give Dorison room to breathe.