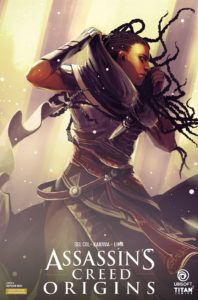 Assassin’s Creed has to be one of my favorite video game franchise of all time, but I haven’t picked up a game since Black Flag. I haven’t had a lot of time to play the video games, but I’ve still wanted to get my fix of the universe. Assassin’s Creed: Origins #1 is the perfect place to do that. If you’re a long time fan of the franchise this comic will be perfect it’s filled with nods that classic fans will pick up on, but it stands on its own has a story without using the franchise as a crutch. Tie-in material usually has a hard time finding the balance between original material and being its own story, but this book does that perfectly. In this first issue, we get the story of Aya an assassin who helps in the assassination of Julius Caesar. In this book, you’ll see the protagonist interact with well-known figures in history such as Brutus and Cassius and right from the get-go you understand that she and Cleopatra go way back. This book takes history and switches it around to fit the Assassin’s Creed mythology and it does so amazingly.

To kick things off, I have to say the art in this issue was really pleasing. Kaiowa and Lima really brought the right feel to the book. This being a fantasy comic it needed this special touch and it was brought fourth perfectly. The pages that really struck me the most were the assassination pages; they were really dynamic and stunning which showcase the immense talent of this team. My biggest problem with the art came with character’s faces they felt bland and very one note. I would have appreciated a little more detail and blend of colors. I had a hard time distinguishing Brutus and Cassius, at first, it took me until my second read to really tell them apart. This made the story a little bit harder to follow than I would have liked. Other than that the artistic team did a really good job on this issue; I’m looking forward to seeing more of their work.

Have you seen this:
Kieron Gillen and Stephanie Hans Discuss DIE on TLDR

Story-wise there was a lot to appreciate here from Anthony Del Col. This book is meant to tie-into the game from what I can see it takes elements from the game such as Caesar’s assassination and blends them with new elements like how Aya thinks and sees the world around her and why she took that decision. This is something I’m very unfamiliar with. Usually, with tie-in series, you pick up before, after or in between parts of the stories, for example with the Star Wars comics. It’s actually something I appreciate a lot because it feels like extra material for the game while being a full story with real stakes that can stand on its own. I really liked Aya’s character and how she is portrayed you get this sense that she is very skilled at what she does but headstrong and still a little brash. We also get a great introduction to her feelings and her outlook on the world. She knows she is lucky, but she still wants to do something for those who weren’t as lucky. There’s a lot to like about the character and I’m interested in seeing where she goes and how she grows in the coming issues.

My only real complaint with the story is the change of heart from Aya, it felt sudden and came out of nowhere. You can see during this issue that she might be a little hesitant, but never to the point of regretting her decision after the deed is done. This is something that could have been kept for the middle of the second issue when she sees how Brutus truly intends to lead Rome. It would have made a lot more sense and would have paced the story a little more. They’re probably trying to move things along quickly since it’s a four issue mini-series, but I’m still hesitant on that decision. Except for that everything flowed well the pacing was good, the protagonist was interesting and it didn’t feel like a cheap way to bank off the game. The story is a fun ride in a universe that has a lot to offer.

Assassin’s Creed: Origins #1 was really good. I think it’s a great addition to the Assassin’s Creed franchise; if your a fan of the franchise you should definitely pick this up. If you’re a comic book reader who is just looking for a good adventure fantasy book I think this could be a comic you’ll enjoy a lot. I liked it a lot despite a few minor issues that I mentioned above. This issue got me excited for Assassin’s Creed content for the first time in a long time. Great job to the entire team behind the project I can’t wait for next month’s issue.