Astro Hustle starts with a 70’s space sexpot tease but quickly pivots to robotic horror before crashing on an isolated with only two survivors, one long lost to space. Then just as the other survivor is revealed as a traitor, the galactic imperial government shows up followed by a corrupt judicial system. All setting the stage for a prison break with an assorted cast of rogues. Astro Hustle may seem like a mash-up of science fiction troupes painted with the lens of 1970’s future, but writer Jai Nitz’s world is more than a collage of retro. Astro Hustle blends up campy science fiction stereotypes into a new creation and world all its’ own.

The drawback to all this blending of genre ideas is that the issue never quite settles into a rhythm. Readers could be turned off by the initial gratuitous Barbarella sex tease that serves only to distract the reader and play with expectations. The lack of a consistent tone through the first half of the book eventually settles in as Astro Hustle finds its’ pacing as this first issue wraps up. This unbalance pacing may initially appear scattered and a product of trying to introduce a world, but Nitz is aware of reader expectations with campy stereotypes and uses them to keep readers and the main character off balance. The lead character, Chen Andalou, returns to a world after 60 years after he and the crew of his ship vanished. Chen is caught off guard by this changed world, just as readers are caught off guard by Nitz frantic pace and genre-hopping.

Nitz’s challenge for this series will be to move beyond genre expectations and to create a world that readers are invested in. The setup is present. Numerous allusions to past conflicts, family legacies, and political uprising provide fertile ground for the story to explore. Now that readers were teased with the world around Chen Andalou, future issues need to give readers a reason to care about that world. If Nitz can do this and move the series past its’ inspirations, Astro Hustle will end up being a wonderfully unique and fun science fiction romp.

A few parts space pirate, a few parts evil empire, a dash of lost bloodline all go into the first issue of Jai Nitz’s Astro Hustle. While readers may still be wondering what to expect from this limited series, this issue makes the case that whatever happens, it will be an adventure. Astro Hustle #1 doesn’t reveal all its’ tricks, but like a traditional matinee serial, it encourages readers to enjoy the ride. 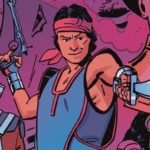 What Happens Next: Spawn’s Sidekick