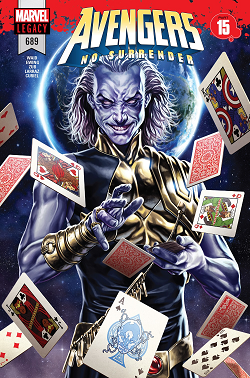 Volcanic earthquakes in New Jersey. Fires covering half of Texas. Electric storms frying Long Island. Everything’s falling apart and any hope of success is fleeting. In Avengers #689, all the Avengers are finally free from stasis. Cap’s calling shots. Spidey’s webbing em up. America’s hands are full in Los Angeles. It’s time to take an all-out stand. However, each rescue proves a mere band-aid on a chest wound gushing blood. It’d be easy to assume a fully assembled team of Avengers could take out the Challenger, excuse me, Grandmaster Prime, but no. He’s an Elder and, apparently, that comes with some serious levels of imperviousness. Take a breath and jump in because everything reaches a crescendo in this riveting penultimate issue of Avengers: No Surrender.

From a story standpoint, Avengers: No Surrender successfully operates as a massive proxy war between Challenger and Grandmaster. These two superpowers have been using external forces, the Black Order and Lethal Legion, who fight to claim dominion over homelands not their own. One wins. One loses. All the innocent people caught in the middle get screwed. It’s a familiar story to anyone who’s read their history. Thank the gods that comic books don’t have to end the way history books invariably do. Avengers #689 turns up the aspiration as the downtrodden of Earth, led by the Avengers, rise up and make their stand to save the world. This series is a wonderful reminder of what we should expect from our leaders, and ourselves, in times of trouble.

Every fight, every moment of resistance and rebellion in this issue reinforces the core idea of the entire series: even if absolutely no one ever knows you did something good, you do it anyway. In a world where everyone, myself included, broadcasts their personal minutiae on social media, it’s a solid reminder that our legacy lives in results, not in how much we talk about it. Avengers #689 contrasts the reactions of the Elders, Original Recipe Grandmaster and Grandmaster Prime, once things stop going their way, against the attitudes of the Avengers, tenaciously fighting to secure even the smallest win in defense of their home.

Despite the ever-increasing odds of death, all our heroes do what they do best; save the world. That’s no small feat considering this issue is packed with no fewer than twenty-seven named characters.

Lightning takes his shot, looking to settle things once and for all, in a crazy game of poker. Will it work? Lightning is one of many new characters to me, but it’s been refreshing to meet and discover so many. Yes, I’m still struggling to remember names and powers but that’ll come in time. I definitely won’t forget Lightning after his amazing turn this week.

Squirrel Girl, one of my favorites, has precious few lines but they pack a punch. Of course, she is annoyed that everyone keeps trying to beat Challenger Prime down with brute force. Has anyone ever considered stopping and talking to him? Possibly try to rehabilitate him? No. But this approach has worked for Doreen in the past and she pushes hard for it here.

Despite these little moments and victories, our heroes are still woefully outgunned. An entire planet falling to pieces is, mathematically, impossible to save., even if you have twenty-seven Avengers on hand. It’ll take Voyager pushing her skills to the max to give the Avengers a shot at living to tell this story.

How does one visually communicate that everything’s going to hell? Pepe Larraz and David Curiel easily master the task this week. There’s a rhythm and desperation to the Dutch tile camera angle on many of the rescue scenes. There is no smiles for our heroes as they just barely manage to rescue those in need. Everyone is holding on by an ever-thinning thread and everything about the art heightens the emotional stakes.

Look at this trippy panel. No, the printer didn’t make a mistake. This is how Synapse, through Falcon using his bird communication powers, sees things from Challenger Prime’s mind. Are you kidding me?!! Larraz and Curiel knock me out with this. I’ve never seen anything like this in a comic book. I don’t even know the technical terms for what’s happening here. It’s the perfect rendering of how I imagine the distortion of looking through another’s mind would be. The art vibrates prismatically and it’s the coolest damn thing I’ve seen in a comic book, probably ever. Like my comic loving big sister/wise Elder, Lisa says, “This is what happens when you have the big hitters on your book.”

Have you seen this:
A Little Golf Journey (REVIEW)

It’s time to take a minute and talk about Squirrel Girl. My only prior experience with Doreen has been Erica Henderson and Ryan North’s A+ super fun Unbeatable Squirrel Girl, which is about an unapologetically smart girl-college student-part time superhero. I was terrified about how would she look and sound outside their run, fearing she’d end up looking like some dime store bimbo made to look a fool (hey, there are people out there who don’t like Doreen, although I don’t think any of them are professional artists, just professional complainers). I am glad to see her voice and look interpreted faithfully and respectfully in Avengers: No Surrender. Even though she isn’t identical to how Erica draws her (cause that would look weird here) she looks as she should: strong as hell, clever, and tenacious. There is a bit too much of a wide-eyed ingenue look in one scene, but I’ll excuse it as she was super surprised at the events unfolding around her. I would be pleased to see her drawn even thicker, as she’s fairly thin here, but all in all, she looks pretty good.

So here’s the deal, this issue hits hard on many levels. What does it mean to be a hero? Who lives, who dies, and who tells the story? Is a legacy nothing but vanity? Honestly, I tried to chip away at those questions in this review but Avengers #689 is too layered to breeze through and toss on the shelf. You’ll be back because this one will pull you back with its tightly woven story and some of the very best visuals I’ve ever seen.