From 3DS to Switch

In 2014 Azure Striker Gunvolt,  a side-scrolling action platform game in the vain of Mega Man Zero, came to the Nintendo 3DS eShop.  After a great deal of success, the series later received a sequel in 2016.

Now, developer and publisher Inti Creates has brought both games to the Nintendo Switch as a part of the Azure Striker Gunvolt: Striker Pack. While bringing a game that was created for a smaller screen (two screens, in fact) might make for a difficult transition, I’m pleased to say that both games have transferred over beautifully.

Azure Striker Gunvolt is set during the near future, where a small number of people called “adepts” contain “septimal powers” - powers that enable superhuman abilities like flight, the use of powerful energy weapons, and manipulation of the elements like fire, water, and electricity.

Players step into the role of Gunvolt - a powerful adept that works for an organization named QUILL, which is focused on taking down the the Sumeragi Group and its controlling and experimenting on adepts.

The gameplay for Azure Striker Gunvolt gives players the ability to jump, dash, and utilize a gun with special bullets that “tag” their targets, granting a homing effect to Gunvolt’s electric fields. This homing mechanic is met by the player’s actions being limited by an energy bar, which depletes when using the electrical field, using additional movement abilities such as double-jumping or air dashing, or taking damage from enemies. 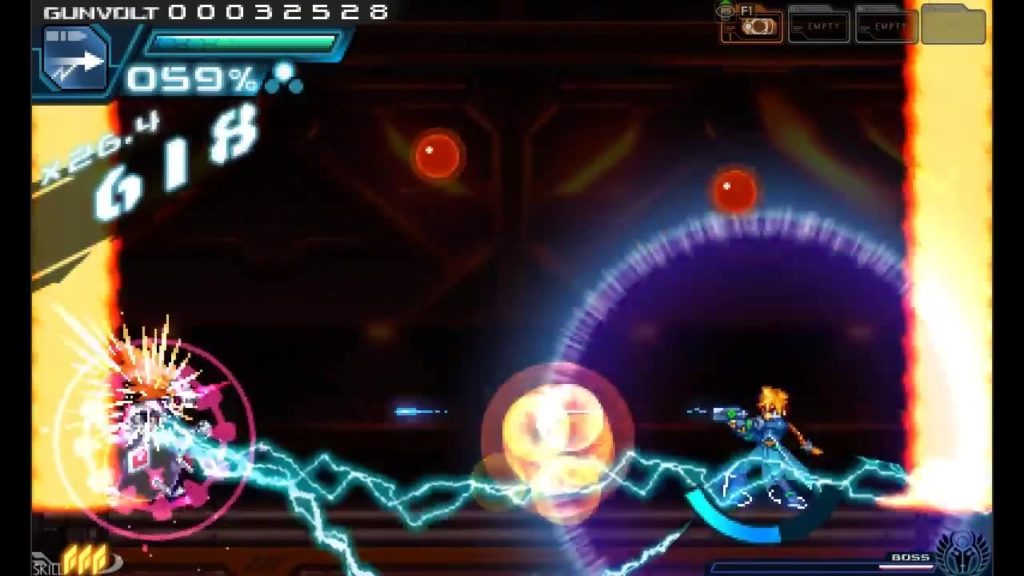 Like Mega Man, this game features a small set of levels complete their own enemies, bosses, and increasing difficulty. These levels can be played it whatever order the player chooses. Unlike, most Mega Man games you may remember, Azure Striker Gunvolt adds another layer in allowing players to level up Gunvolt and even collect materials at the end levels, all of which make Gunvolt a more formidable protagonist.

The boss battles at the end of each level offer a great deal of diversity and boy, can they can be incredible hard, too. Timing is essential, as is understanding how and when to use your abilities. Gunvolt can build up to more powerful attacks but once they have been used, you have to rely on his normal abilities. The game does have its hard moments, but nothing ever felt impossible. In the case it is too hard, you can switch difficulties to progress past those obstacles.

One gripe I have about both titles is that because this is a Japanese voice acted game, subtitles are used at both the bottom and top of the screen. By doing that, much of the screen’s real estate is taken up and it makes seeing enemies difficult. I encountered this a great deal in boss battles, as these enemies talk to you while you are fighting them. Too often was I taking damage from unseen directions because the screen was partially obscured by subtitle text.

I love that subtitles are in this game but my goodness, do they take up a lot of space.

The sequel Azure Striker Gunvolt 2 features few changes in its gameplay mechanics but one big change is that you play as two different characters - Gunvolt and his rival Copen - a human with a more gun-based attack style - who must work together to solve the threat of a new enemy, Eden.

Switching between these characters is a great feature that keeps gameplay fresh and really expands the game’s narrative. Copen especially feels different, and while that may seem a bit jarring after playing an entire game as Gunvolt, the gameplay smooths itself out and I was able to settle in with his control scheme.

A good game? A good buy?

The art style and voice acting in both of these games is great. Every character contains a great deal of personality, and the story, while not intricate, is interesting enough to keep you moving forward to find out what happens next.

I really enjoyed both games and I came away impressed with how well they both transitioned from 3DS to Switch. The price for this pack is $40. Both of these games can be beaten pretty quickly but not easily. I spent about 10 hours combined to beat both. But the levels and boss battles are fun. The gameplay is solid. If this looks like your kind of title, I totally suggest you pick it up in the Switch eShop.