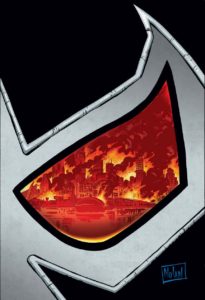 On one hand, it seems like a good idea to launch a Bane mini-series coming off his amazing “I am Bane,” storyline in the main Batman series. But on the other hand, his appearance in Batman would be tough for anyone to follow. Luckily we have Bane’s creator, and comic book legend himself returning, Chuck Dixon.

This issue was not the most exciting read. Not much happens, and what does happen isn’t very exciting or compelling. Bane and his men commandeer a ship full of weapons that had been headed to Gotham City. There are some fun action sequences that were reminiscent of the beginning of Captain America: Winter Solider. Only instead of a shield, Bane is cutting off limbs with a knife. There was just one brief scene of Bane in the shower as a child, but I didn’t get much out of it. Overall, it was a bit of a chore to finish this issue, and there wasn’t much payoff. There is a lot going on, but no reason to care. It’s a supervillain taking on lesser villains, which doesn’t create much drama. 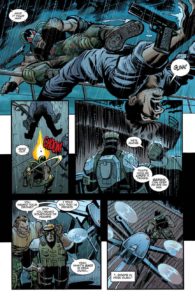 Bane is a villain with so much potential though, that’s why he worked so well in the Batman series just a few weeks ago. He can become an interesting and likable anti-hero very easily. His action scenes were all fun, but not overly exciting. His interrogation technique was brutal, and something we would never see from any other main character in DC, except maybe Deathstroke. Though Slade’s solo series shows him to be more of a thinker. The side characters in the issue were a bit overshadowed by their boss, but hopefully, there is more to them.

The art was very 90’s so I enjoyed the hell out of it. I don’t need Bane to look monstrous in every appearance. He has a very realistic look to him that works well in a comic that he is the lead character in. I am looking forward to seeing what other Batman rogues show up, just to see this artist’s interpretation.

If this were any other creative team, I probably wouldn’t be back for a second issue. I know that these guys can put out some great comics, so this issue can be forgiven. I just hope the second issue picks up a bit.