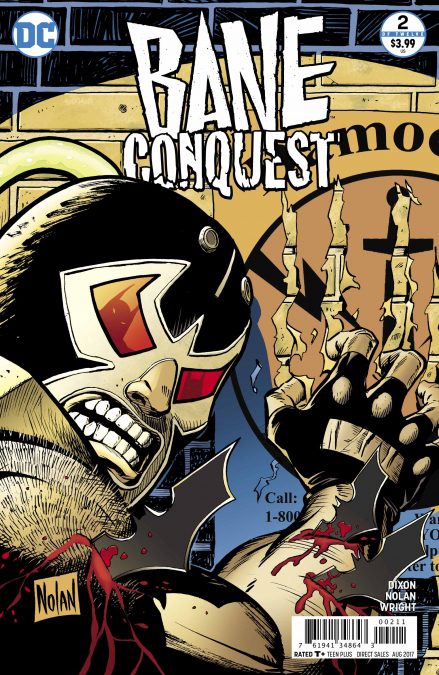 Bane has been captured by the weapon trafficking group named Damocles. While locked up, he runs into his old nemesis, Bruce Wayne.

It’s silly to give up on a comic book after one chapter, but I admit, I did not see any hope for this series after the first issue. Well, this second issue has turned things around for me completely. Not only does this issue have that retro style of art, but now it has a classic Batman comic feel to the story. Batman and Bane working together to get out of a prison felt like it was taken straight from the Batman: The Animated Series.

This issue stayed true to how these two enemies would react to working together. The arrogance of Bane and the calculating nature of Bruce were on display throughout. The dislike for each other was present, but both were smart enough to quickly know they

needed each other. That’s what makes them such interesting opponents, they both have plenty of brawn, but also process impressive brains.

Damocles would seem like a throwaway evil organization if not for the mystery behind the name. Bane explains that Damocles is the victim in his story, and because of this, Bruce surmises that there may be someone pulling the strings. Not only was this a great way to show off Bruce and Bane working together, but it also made the villains much more interesting. Not a lot of things happened this issue, but everything that did happen was impactful.

Not only did the story feel like a Batman: The Animated Series episode, but the art did as well. Bruce looked really close to his animated counterpart, it was great. The art in the first issue was a saving grace for me, and it fit this second issue so well. Since this is a mini-series I’m hoping that the whole art team moves onto a main Batman book, because this retro style is really working for me.

I may have doubted the team of Chuck Dixon and Graham Nolan in being able to recapture some of their old comic glory, but I was proven wrong this issue. I’m hoping that the next issue can build in this one because I was impressed. I hold BTAS in high regard, and if you told me this was a long-lost episode of it, I’d believe you. I loved this issue but there were a few hiccups, like the flashbacks which still feel like an abrupt interruption. Still, I am impressed.