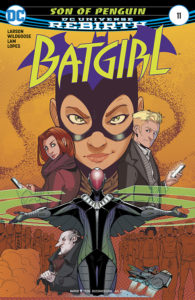 The Batgirl series has gone full on millennial, and though it’s hard to admit, it’s a fun ride.

Penguin’s son Ethan reveals himself as Blacksun. Thanks to his new tech suit he can control the people of Burnside. I think he is a nice addition to the Batgirl rogues, though he seemed more intimidating as a rich and charismatic tech guy. There is a lot of potential for good stories having to do with criminal father and son masterminds facing off against each other. One of my favorite things about this issue was the fact that Blacksun’s biggest weakness is Dick Grayson, not Nightwing. 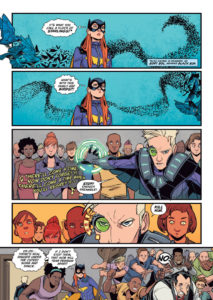 This series has a good amount of action, but what I like most about it, is the laid back feel of it. It almost feels like a slice of life manga with Barbara going on dates, and dealing with her friends. Though the constant need of Barbara having a love interest is getting tired, it’s nice to see a character live their life. Some of my favorite single issue stories are when the superhero gets to put their hair down and relax. Perhaps I’d feel different and want more from Batgirl if Barbara Gordon wasn’t in the Birds of Prey series. But we have both, and they balance each other out.

They’ve had the same art team for this whole Son of Penguin story arc, and though I wasn’t big on them the first issue, I’m really digging it now. It fits the tone of the story perfectly

The series, this story arc, and this issue can all be described the same way: good, but not amazing. Since the launching of Batgirl of Burnside, this series has had different sensibilities. I’ve gone into this Rebirth series with an open mind and I think it’s a cute little story. I would like the creative team to strive for more eventually, but they’re all doing a solid job.