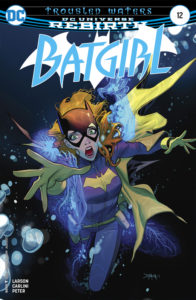 A spirit is haunting the pool at a YMCA, and Batgirl has been called on to investigate the phenomenon. Barbara Gordon still believes that there is a scientific reason for the occurrence.

I guess Batgirl was due for a filler issue. A red light has been popping up at a local pool and Barbara is forced to work along side a female ghost hunter. Work seems like an over exaggeration. Batgirl only spends a short time at the beginning of the issue and at the end of the issue at the actual pool. For most of the story she is investigating, which also feels like an exaggeration to say. I’m sure this is only a bridge to the next big arc, but it felt like the writer sped her way through this comic. 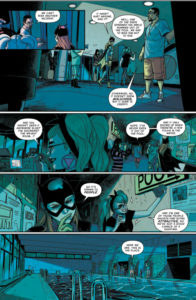 The first friend she asks for help from leads her to the bad guy, a professor that never actually shows up in the issue. To figure out his plan all Barbara needed was one photo, which she found easily at someone’s apartment. Then she uses her genius to surmise what the bad guy’s motivation was, the weapon used against the victim, and how to save said victim. It was all done so quickly that it was kind of a shame that it felt so rushed, and this seemed like such a neat concept for a story.

The one bright spot was the art. Eleonora Carlini is new to the series, but I don’t know if she is just filling in or staying on for good, I hope it’s the latter. It’s different from what we’ve seen so far, yet keeps to the tone of the book. The colors used in this issue were fantastic too. Because the issue revolved around water, different shades of blue were used throughout. It all looked great, I just wish there was a more complete story to tell.

Even though it felt like a one-shot, there was one small hint that it could lead to something more down the line.