The Calm Before in Batman #16 REVIEW 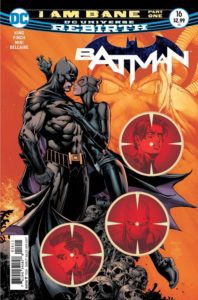 Tom King’s Batman #16 is as sweet as ever for the writer. His first arc’s lackluster run now seems like a distant memory when put up against the perfectly paced latest issue. Finch returns to draw this one, and though I really loved some of the guest work from the past several issues, there’s an undeniable chemistry shared between the two artists, he and King.

Just as I was sad to see the Rooftops mini-arc come to such an abrupt and undesired close, King calmed my nerves by delivering the introduction to this I Am Bane arc with an issue that is all at once silly, exciting, surprising, and it totally feels like the calm before a storm. Much of it is spent in a Batman-themed fast food joint where the Dark Knight convenes with his cabal of bird-like sidekicks (the one’s alive, anyway), instructing them to go on vacation or fight crime elsewhere if they must but to ensure they leave Gotham. Because they’re the Robins, as they comically point out, it’s essential for them to defy him and plan to fight by his side. 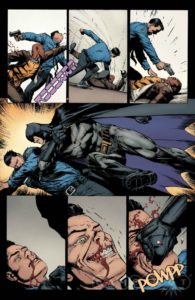 Bane’s presence looms large across the whole issue, even as he never appears in a single panel. Batman needs days to finalize his efforts to save Gotham Girl, and he knows that Bane knows that too. Aside from that, however, is Bane’s animosity toward the Bat regardless of any attempts he may have to thwart Batman’s rescue attempts. He is coming. And he wants to break the Bat when he arrives.

This sort of driving force, so serious in tone, is sometimes countered poorly by the lightheartedness of the setting and the sidekicks’ banter, but the massive cliffhanger spells out why that is; the juxtaposition is not to be overlooked. King wanted to show us that Bane is not to be taken so lightly, and even though the startling imagery in the final page reeks of something that will quickly be undone with some deus ex machina the medium is known for, for at least these next two weeks, I’m left stunned and anticipating the next issue.

If you can’t tell, issue #16 is my favorite of King’s work so far. Something wicked this way comes. And if these twenty pages are any indication, Gotham — maybe even Batman himself, won’t be ready.