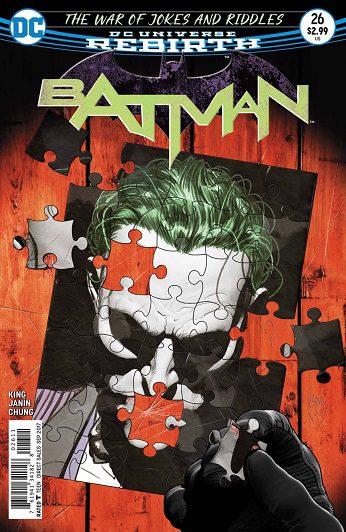 The War of Jokes and Riddles is ramping up to be the most cinematic of Tom King’s work so far. Batman’s battles with the masked villain in the I Am Bane arc were very cool, but two issues into this latest arc it feels like this could be his best stuff yet.

Perhaps I missed the memo but I didn’t realize this was a flashback story, though it makes sense, since we last saw Bruce Wayne in present day proposing to Selina Kyle. Now in the new arc, he is recounting the tale to a half-dressed Selina in bed. There’s a lot to love in this issue. First, it’s drawn fantastically. The panels really frame the story with that aforementioned cinematic quality. It’s always fun catching the first glimpse of a new artist’s rendition of characters, and in this one — like the last — we get to see Janin’s take on pretty much the entire A and B sections of Batman’s rogue’s gallery. That mass inclusion of so many bad guys gives the arc the feeling of a great video game or the animated series. All hands are on deck and lines in the sand are being drawn. 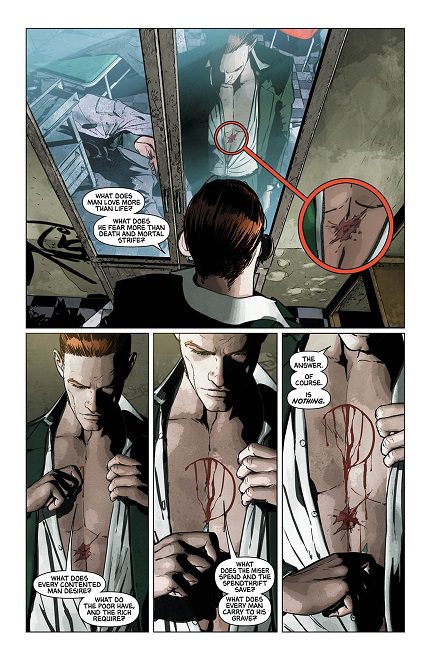 The plot follows slowly again like its predecessor. It feels like a lot of Batman saying, “oh boy, wait til you hear how bad it got” but for now 40 pages. That could be seen as a calm before the storm and mostly that’s how I view it anyways, but it deserves mentioning that this arc is a decidedly slower build-up to the drama compared to I Am Suicide and I Am Bane.

As good as this arc has the potential to become, what I’m most curious to see is how it’ll materialize in later arcs, a few years from now even. King’s predecessor, Scott Snyder, was always conscious of his own precedents he set. He worked and built upon a foundation of his own storylines. While it seems like a basic how-to for comic writing, some are better at it than others. When it’s done poorly, you can leave your overarching narrative feeling disjointed. I’m hoping years from now, we’ll look back at The War of Jokes and Riddles and find it both stands the test of time as a modern classic and offers rippling effects that can be seen in those future arcs by King. The potential is there and the setup is strong. Now let’s see it come together.