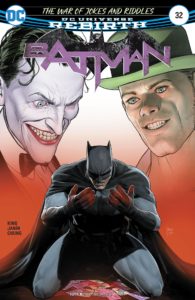 I have felt that the “War of Jokes and Riddles” arc has been pretty lackluster and I kept thinking “what’s the point?” This issue finally answers that question: it’s to develop Batman’s character to a whole new realm. We all know that Batman doesn’t kill and he knows that too, but there was a time where he was brought to his breaking point and that’s what this issue explores.

Now, I believe this issue will be very divisive for some fans because they believe Batman is absolutely good and would never be tempted to kill. But I believe that’s highly unrealistic, humans aren’t perfect and Batman is human after all. People make mistakes all the time and I can contest to that. I’ve made brash decisions that were spur of the moment that I have regretted and I’m sure whoever is reading this has too. This story has been told by Bruce to Selina to let her know what he had done, he was tempted to kill. He had to tell her this story before ever going through with marrying her. I loved her response to all of it: “who cares?” Our past decisions don’t matter in the future as long as we learn from them. Bruce experiencing this urge to kill in one small moment will stay with him forever and that lesson will be forever learned.

Have you seen this:
John Constantine: Hellblazer #9 (REVIEW)

The moment we’ve all bee 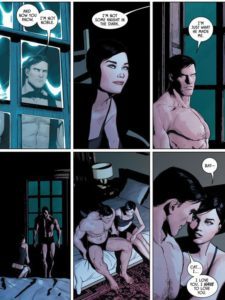 n waiting for happened in this issue: will Selena say yes to Bruce’s proposal? Well, of course, she says yes. This story really didn’t sway her to saying no and I’m glad she said yes. I’m really interested in seeing the marriage play out, how it will affect the book overall and if it’ll ever cause any conflicts. Tom King said on Twitter that if Bruce and Selina were to ever have a child he’d name her Helena and it would be so fun to see in the far future. Maybe she can become a superhero called Bat-Cat or something.

I don’t want to spoil the way the war ends, I suggest everyone read it for themselves as it’s actually a brilliant way to end it. It’s a quick read but with the way King write his story, it feels cinematic and has the flow of film action that makes it quick and entertaining. This has been the second time that King has delivered a story in this title that has been lackluster throughout but sticks the landing so hard that it makes the story make sense as to why it slowly built up to it.