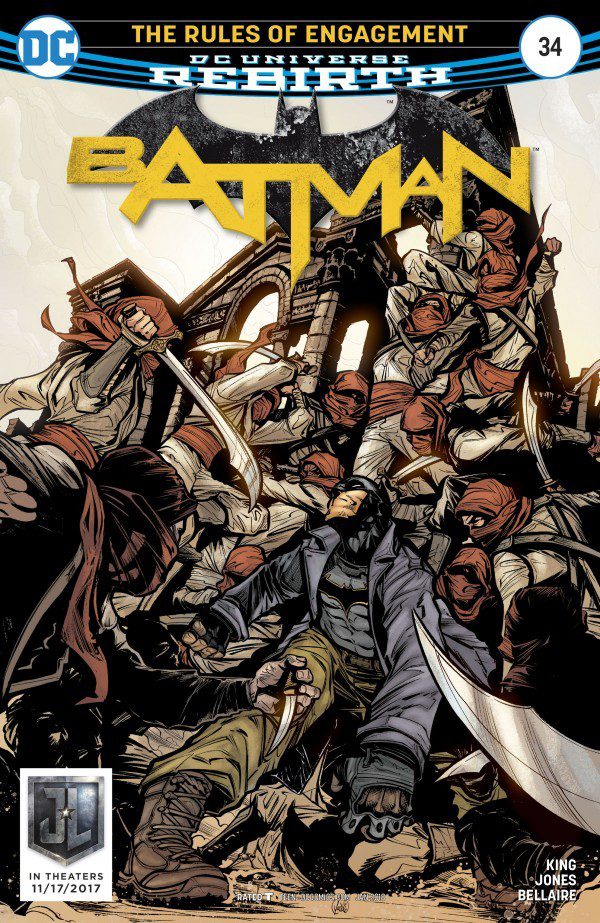 I think it is pretty obvious to most everyone that Tom King can write the crap out of anything.

His Omega Men run, his Vision series and the mind-blowing, medium-defining wonders he is performing in Mister Miracle at the moment are positive to shoot him into the upper echelons of the craft. Oh, and he also writes some stories about a guy dressed as a bat.

It is hard to imagine anyone wanting to pick up the writing reins after Scott Snyder’s incredible run, but few could imagine a better writer to take the Bat in the direction Mr. King has. This new arc is only two issues in after his sprawling War Of Jokes And Riddles saga, but King continues to make Batman very much his own. Taking a very different route from the previous storylines, this arc seems dedicated to one thing; embedding Selina Kyle firmly within the bat-family. Spoiler ahead, but if you don’t already know, Batman has proposed to Ms. Catwoman and she has accepted. Whatever your feelings about this, save them for the forum of your choosing, but King and co. are running with the idea and this storyline is the first real one to see if the concept has legs.

Look, it’s certainly entertaining and a completely different angle to give Bats and the repartee between the two is definitely lively. But does it dilute two characters who are so infamously loners? Yes, Yes, it does. There is something unnatural about Bats acting the love-struck goof, especially in the middle of a violent skirmish. King has taken many a risk with his characters, but this one threatens to confuse the core of his main character, so there is some trepidation in reading it. Of course, on the other side of the fence, he is a first-rate writer so I have every faith that the pay off for all of this will be satisfying, at least.

Tom King’s regular collaborator, Mikel Janin has been absent for this, Rules Of Engagement arc, but Joelle Jones has done a fantastic job of replacing him. The style is strong and resonant and even though the figure work can be a little clunky at times and the facial recognition is a bit off, the artwork suits the setting and tone very well.

Narratively, this issue is a bit awkward and if you haven’t read the previous issue, you will be wondering what the hell is going on with Robin and Superman and why we suddenly find ourselves in that particular encounter. Regardless, hearing Damian threaten Superman is always worth the price of admission and, personally, I can never get enough of the dynamic between Damian and Dick, the real dynamic duo, in my humble opinion.

Whatever your thoughts about the recent developments in Batman’s personal life, it is hard to deny the sheer entertainment value of Tom King’s writing. It leaves you completely unsure of what its to come and that, to me, is what a great story should be all about. Not shock value or spectacle for the sake of it, but intriguing storytelling, beautifully told. That’s Batman right now.