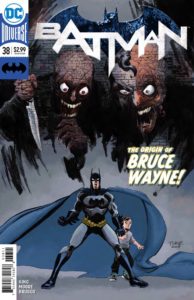 A child’s parents are murdered and they reach out to Bruce Wayne for help, while Batman attempts to solve a string of murders.

Tom King flexes his Bat-muscle in this retro-style issue. Once you get to the Dennis O’neill shoutout portion of the comic book, you know you’re in for a classic Batman detective story, and it was fantastic. Bruce being there for a child after losing his parents reminds me an episode from the animated series Young Justice where Wonder Woman calls out Batman for using children in his war on crime and asks if he wants Dick Grayson to be just like him. Batman essentially says he lets him fight so that he doesn’t turn out the same. That kind of mindset of Bruce wanting to alleviate the pain and suffering he still feels as an adult makes the conclusion of this issue all the more tragic. It is an interesting twist to see the man under the cowl as a source of inspiration. 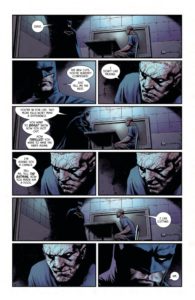 Whether it be coincidence or by design, the artist working with Tom King have been leaning heavily on the grid panel format. That’s not a complaint either because each one uses it so well, including Travis Moore in this issue. It works well with this particular story which pays homage to past stories. Even Zsasz has is sporting his old look, though I’ve grown accustomed to the bald design, he looked very menacing. Moore’s pencils are wonderful, I’m surprised I don’t see him in more stuff. All I remember him on is The Wolf Among Us companion comic book, but that required such bold linework to match the look of the video game, which is weird because it’s based on a comic book, to begin with. This issue, however, looked lovely, thanks in part to Giulia Brusco’s beautiful monotone-esque colors as well. They really made the bat-symbol pop, it was a nice touch.

I would love to see more one-off stories mixed into long comic book runs. This was a nice callback to classic issues of the caped crusader. Catwoman didn’t show up much and wasn’t a part of this story outside of framing the dichotomy between Batman’s optimism and sorrow. Unlike the previous arc, she wasn’t needed, and this had Batman at his best. Date Night and Birth of Bruce Wayne couldn’t be any more different in tone but both have been refreshing additions to the Dark Knight’s story.

Have you seen this:
Animated Film 'Batman: The Long Halloween, Part ONe' Finds Its Voice Cast

Batman Tom King Travis Moore
Are you an Insider?News, reviews, & updates are just the beginning.