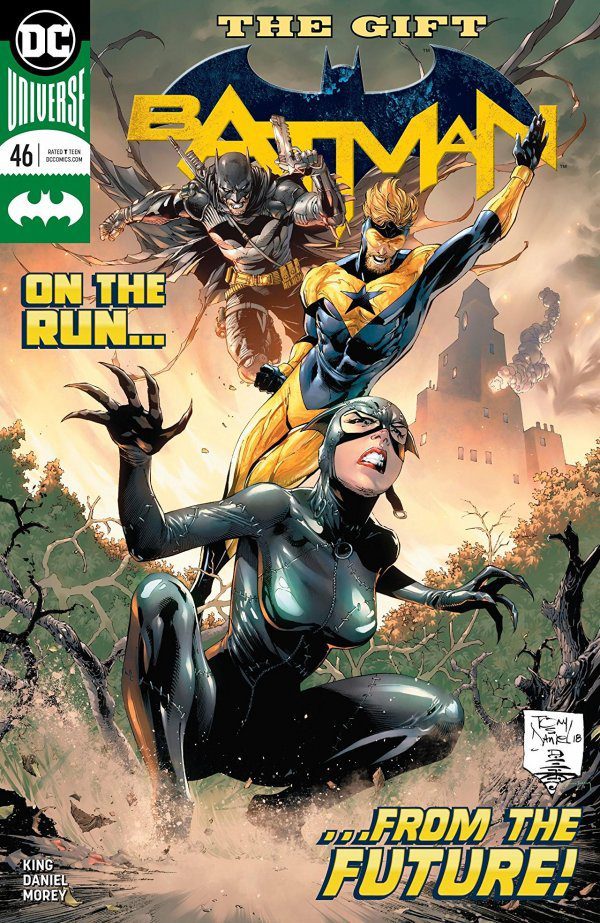 One year has passed since Booster Gold went back in time to save Bruce’s parents as a gift so that he can appreciate the life he has, not the one he could have had. Things have not worked out the way he had hoped in this new timeline, so he enlists the help of Selina Kyle.

This issue for Booster Gold is the equivalent of that one scene from the tv show The Office, where the office idiot Kevin, drops a huge pot of chili on the floor, and as we hear him describe the painstaking process of making the delicious chili in an interview, we see him frantically trying to scoop it off the floor and back into the pot. One year later in the new timeline, he created and Booster is still trying to scoop his chili back into the pot. The panels with Selina were hilarious but I didn’t quite understand how Selina Kyle would help Booster’s situation. Maybe we aren’t supposed to understand and simply enjoy reading about him idiotically trying to fix things, but he should know how time travel works. Still, it’s hard not to be intrigued with the car wreck that is this new timeline.

Tony Daniel is one of my all-time favorite Batman artists because his Dark Knight kind of incorporates the best aspects of artists before him. Selina Kyle was a standout this issue, both in and out of the Batman Returns inspired Catwoman costume. Also, the post-apocalyptic type Batman costume that Dick Grayson wears looked amazing. There was a lot of panels that focused on character’s emotions through their face, it was a nice touch.

The storytelling wasn’t as strong in this issue compared to the last. Some parts were just straight up confusing, including Booster’s rambling. But it was successful in portraying his situation as a complete mess, and the ridiculousness of it all is highly entertaining. I love Elseworlds and time travel stories so I’m enjoying myself quite a bit, but this second issue was a bit choppy. Still, this is another good outing for this creative team.