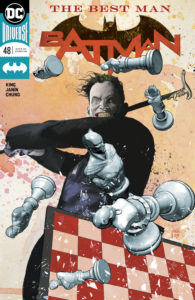 The Joker wants his invite to BatCat’s wedding, and his only option to get Batman’s attention is to kill a bunch of people.

I think the worst thing you could do with Joker is make him a brooding serial killer. He just hasn’t been himself for the last couple years, and that includes Tom King’s recent Batman story arc, “The War of Jokes and Riddles.” Though the excuse there was that the clown prince of crime had essentially lost his mojo and couldn’t laugh, so he was purposely different. The Joker in this issue, however, was a huge improvement with the air of mystery surrounding the character returning. Every panel is ominous and tension filled. I have no idea what he’s going to do next and I’m very excited about that.

King has a few issues of Batman and Mister Miracle that take place within a single scene and they usually turn out pretty solid. Unfortunately, there were a ton of problems in this one that really undercut the horrors of Joker murdering people one by one. The one-sided conversation with an emotionless Dark Knight might not have been so bad if Batman didn’t come off so uncharacteristically foolish and clumsy. He was falling into Joker’s traps and playing along with everything without saying a word. Bruce looked incompetent, it was odd. True, realistically Bats should be able to handle a psychotic clown with ease, so a suspension of disbelief was always required to enjoy this rivalry. But this was a bit much.

Mikel Janín has some of the most beautiful pencils in the industry and June Chung’s colors make each panel pop off the page. Joker has a classic look to him in his purple tux, but still feels very fresh. Janín’s Batman is a great blend of his Rebirth look with a hint of the Arkham City video game costume. There wasn’t a lot for these artists to do but they made the best of it, the comic looked amazing.

I thought the tease of this arc in the DC Nation #0 comic was better executed. Only one person dies in that short story, but Joker was so creepy and menacing in it. As for this issue, there were things I liked and didn’t like. I’m looking forward to the next issue, but I’m hoping Batman gets it together by the end of the storyline.

Not a bad issue by any means, but an uncharacteristic Batman and a dialogue hogging Joker took the air out of this issue’s sails.