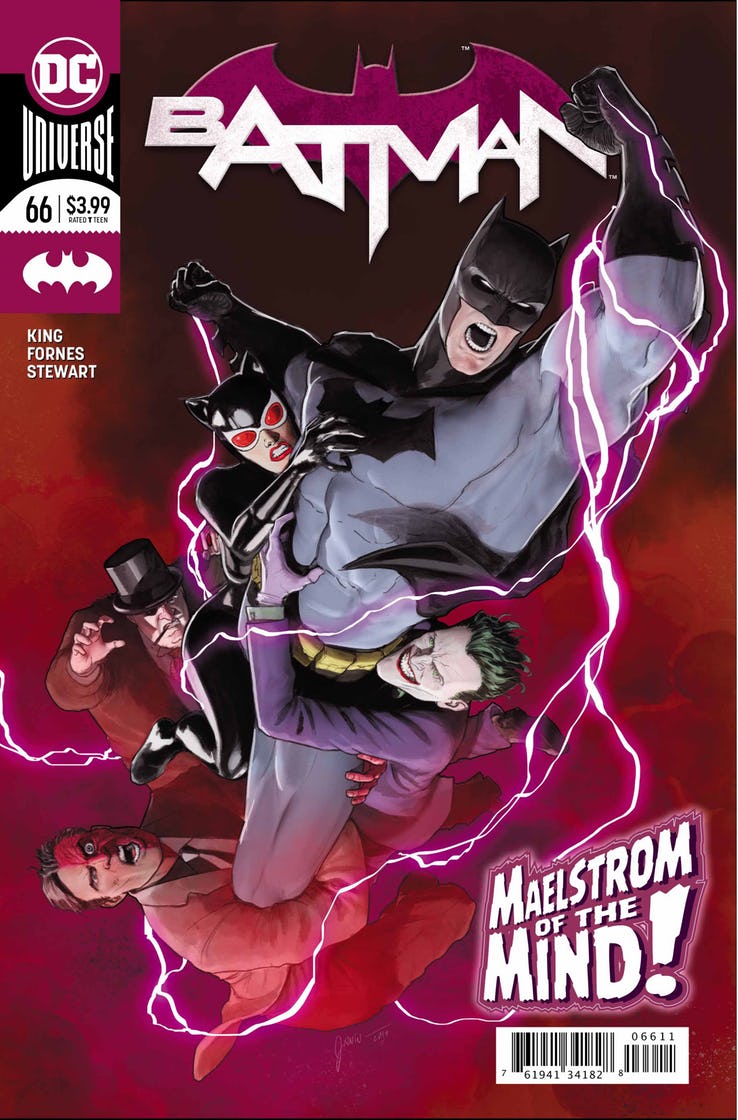 There is a timeless charm that all great love stories have. Romeo and Juliet, Lancelot and Guinevere, Jack and Rose; you get the idea. There is a charismatic pull between two would-be opposites that somehow their attraction overrules the natural order of the universe. There are a great many loves and lovers within the DC universe, but are any as chaotic and tumultuous as Bruce Wayne and Selina Kyle? -The fabled Batman and Catwoman. Even the “World’s Greatest Detective” may have a hard time finding that answer.

Bruce is waging a war within himself as someone or something forces him to face all of his greatest fears. This particular issue is devoted to the on-again-off-again romance that has transfixed readers for decades. In Bruce’s imagination, he pictures Selina being interrogated by The Question, but the subject of the questioning is not a crime or murder, but the deepest question Bruce may never know the answer to… WHY.

Why did Selina leave him on the eve of their impending nuptials? How could she walk away when everything was going so right? It’s that one burning question that Bruce can’t answer that drives him mad. He needs an answer. He has to have it. Even if he is only going through this scenario in his own mind, he can’t accept a lack of any explanation at all. There has to be an answer.

The story that Tom King writes in this issue is as timeless as the love between these two characters. Everyone who has ever risked their heart and had a relationship fall apart for reasons unknown can understand that burning need for resolution where none may be found. Bruce dwells on this enigma in the middle of these “Knightmares” as a way to focus his mind. To keep sane he drives himself to try and figure out where it all went wrong with Selina; a question without an answer.

The pairing of King’s writing with Jorge Fornes’ artwork makes for an instant classic that draws comparisons to old noir and pulp stories of the ’40s and ’50s. It’s hard not to read this and draw connections to tales like Casablanca; Bruce in the role of Bogart, Selina in the role of Bergman. Timeless might be the best one-word description of this issue; as this comic serves as a perfect capsule to explain one of the greatest romances in the DC Universe.

The work of Stewart and Cowles only serves to enhance what is a damn near perfect read. The colors provided by Stewart lend themselves to only enhance the nostalgic motif of the issue. Take note of the scene in the rain on the rooftop. As Cowles does a trick in this issue that you rarely see a letterer asked to do and that is use the word balloons as panel breaks in the middle of a comic page. This forces the narrative to sit front and center as the art is divided by the words…a perfect balance of comic perfection.

This single issue is a testament, not only to the characters but to the hardworking creators as well, that their love is now forever etched on the page for the world to see. This will be a hallmark issue for King’s already celebrated run as he has found the heart of the Bat. Now the question becomes, as we move forward, does King save Bruce? Or does he take a cue from Selina and shatter it?