The Bat and the Cat are back with a score to settle – and more fool those who get in their way. But with Bruce’s son held prisoner and Gotham Girl wounded, Flashpoint Batman’s allegiances will be tested. Just who’s side is he really on?

It’s great to finally see Batman and Catwoman start to take back their city after a brief and picturesque interlude in paradise. The pacing of the issue is once again back on form as Batman goes toe-to-toe with a bunch of classic villains that stand between him and Bane in a number of action packed panels showcasing Bruce back to strength. “You’re back?” Kite Man asks, “Hell yeah” Batman responds – teasing the long-awaited showdown between the Caped Crusader and his father and Bane.

A shocking request is made of Thomas Wayne at the end of the issue, which surely leaves me thinking he can’t/won’t go through with it. Can he redeem himself and save his family? I really do hope so. However I don’t hold out much hope for Gotham Girl though, her future really isn’t looking all that bright with her weakened condition. There’s so much tragedy surrounding her, it really would be nice to see some sort of redemption or resolution for the character.

With the legendary art team of John Romita Jr. and Klaus Janson on board for two issues, this title retains it’s spot as one of the best looking series out there. There’s a definite noir feel to this book, contrasting greatly with the previous two issues, as the rain pours down on a decidedly detective looking Bruce Wayne as he wonders the streets of Gotham. The intensity of the color palette, with the vividly warm orange and red hues, really does bring the pages to life.

With the promise of two action-packed issues that will rock Gotham City to its foundation, I have all of my fingers crossed for a hugely climatic showdown in the next part of the tale. Come on King, don’t let me down! 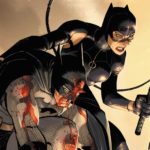 Aaron Sorkin’s ‘The Trial of the Chicago ...