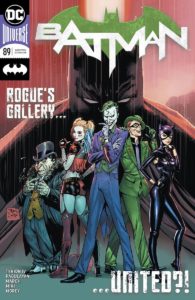 The most hyped book DC has promoted since Batman Damned is this one. The main reason why they are pushing it isn’t the story (which is good) but the Joker gets a new henchman. This would be marked as a spoiler, but DC a few weeks ago sent a notice to retailers about this and like a good joke, it took off.

The new character is Punchline. She makes a cameo appearance and we don’t get her official origin or appearance until Hell Arisen issue 3. Her part in the book is little and doesn’t help justify the hype. Taking her away the story is still strong.

Moving away from the hype the story is strong and feels oddly familiar to the Dark Knight storyline. Batman is being pushed to his limits and he has to solve each crime as it shows up. Yet it’s different as we get him working with other players and isn’t being pushed to his limits like Bane did to him. This allows the story to keep its original feel and builds upon the world that King created before he left.

Tynion IV delivers another strong issue in his Batman run. He hasn’t tried reinventing Batman and using his strengths to tell a story. This is key as most writers have a hard time finding his voice at first. Since Tynion was a Snyder understudy, we see that peaking here and there but he ultimately used his own voice. Building upon the hype of Punchline doesn’t take away from the main story and her inclusion was used tactfully. 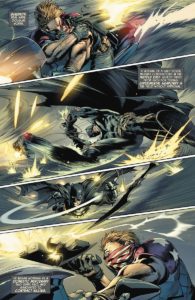 The art is done by three different artists. This was a unique take and was very difficult to pinpoint who drew what. Their Dark Designs has had amazing art in every issue. The detail and care taken for each panel are important as you don’t want to give the story away. Having art that is meticulous shows how involved it is in the story. The consistency of each piece has placed this book in a top tier category.

More from GWW
Web of Venom: The Good Son #1 (Review)

In the end, the hype of Punchline doesn’t kill the book. The price and the ability to find a first print is a different story. DC was smart to push this book the way that they did because it caused hype for the character. So hopefully her first full appearance doesn’t undermine the enjoyable story that Batman is currently experiencing.