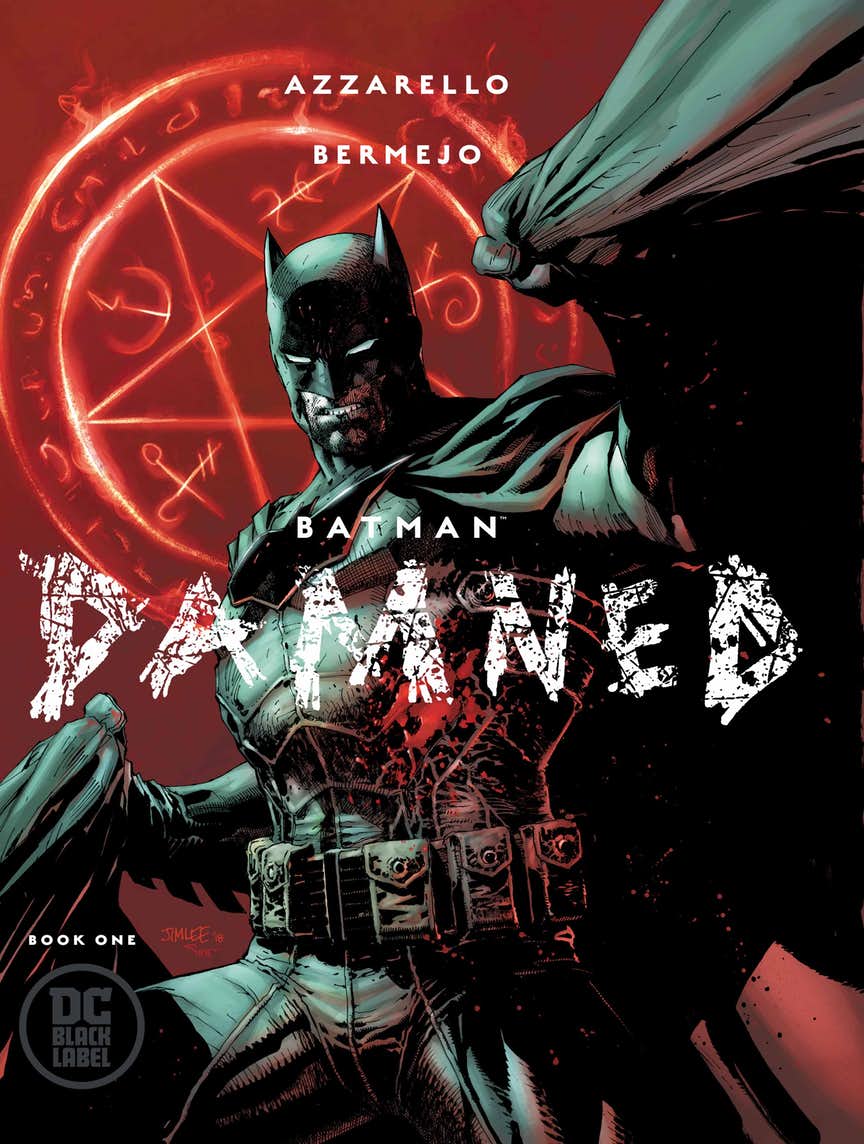 Batman: Damned kicks off in a way you wouldn’t expect: Batman is in an ambulance. Blood is gushing from his side, he’s severely wounded, but that doesn’t stop him from kicking some serious ass when they talk about pulling his mask off. He takes out the EMTs and cops in the vehicle, bailing out the back door. He collapses in an alleyway, telling Alfred he needs help. Right before he slips into unconsciousness, John Constantine appears above him. ‘You’re not Alfred,’ Batman manages to get out. ‘No sir, seems like the butler took the…knight off,’ Constantine replies right as Batman slips into dreamland. Bruce is on a playground, a child again, spinning on a roundabout. He shouts to Thomas and Martha, both distracted by other things. Thomas is busy talking to a woman in a green dress while Martha sits there and glares at him. Then, a creepy voodoo-magic girl pops out from behind a tree. We recognize her as a young Enchantress, but Bruce does not, and he falls off the roundabout.

It seems he was the only one who saw her. Flash forward to present day, and Batman shoots up out of a bed. He stumbles out of the bedroom and into the living room of Constantine’s apartment, where the Hellblazer is sitting an armchair watching the news about a body being found. This doesn’t appear special at first, until you realize it is The Joker’s dead body being pulled from the river. Boston Brand, aka Deadman, shows up at the mention of a dead man being found. Constantine calls him a pest as Batman remembers that he was on the bridge as well, so he runs off to investigate. Another flashback, where we see Thomas getting sleazy with the woman in the green dress from before. Bruce is paying no attention as he leans over the edge of the bridge, almost falling right before Thomas grabs his leg and yells at him. Back to Batman on the bridge, watching Gordon examine the body. A crazy guy (who I think may end up being Spectre) is yelling that a monster threw the Joker in, that the devil is in Gotham. The crazy guy runs off, Batman hot in pursuit, but loses him at the entrance to a tunnel, where a face appears in the fog, saying ‘I know what you did.’

Back in the Batcave, Bruce has the computer scan him for stab wounds. There are none, which is weird considering he had them hours before. He asks for the location of Joker’s body, but the computer says the location of the body is unknown. Bruce then hears the strange voice from the tunnel, right as an empty bat-suit reaches for him. Skip to the streets of Gotham, where Bruce is disguised as a homeless man. Deadman appears to him once more, saying that dark forces are after him. Batman watches who can only be Zatanna play a magic trick on the people gathered around her. As they walk away, Bruce approaches her, asking if she’s seen his friend, as he describes the Joker. ‘Is this your friend?’ she asks, holding up a Joker card. Back to Wayne Manor, where Bruce sits, almost in a deep slumber. Another flashback to his childhood, this time he is awoken to Enchantress sitting in the corner of his room. When he gets up to talk to her, she asks if he’ll cry for her, and then she holds up a bat to his torso. Adult Bruce wakes up screaming and clutching his chest. Then cut to Batman walking into a church, where Constantine sits in the front pew. He asks Batman if he believes in the afterlife, for, according to Constantine, the afterlife believes in him, as we see that the church has been vandalized. Someone has put Joker’s classic makeup over the face of Jesus on the cross, with the words ‘ha ha ha’ scribbled all over the room. Hell of a way to end the first issue.

Azzarello’s first issue in this continuation of Joker is just as strong as its predecessor, if not more so. Not only does the ever amazing Hellblazer provide insightful narration to the story, but his intriguing view of Bruce’s psyche give the reader a lot too think about. His tongue-in-cheek dialogue provides a little bit of a lighter tone in this bleak universe. This isn’t just a Batman/Constantine crossover, but it’s almost a full-fledged Batman/Justice League Dark crossover with the number of supernatural characters that are appearing. The story is off to an interesting start, one that feels fresh and new without twisting characters into something unrecognizable. Each character is given a different spin though, except Constantine really. Bruce is a broken shell of a man who is ready to break at any moment. He’s not strong-willed, he’s fragile, and needs to be handled with care, even though he puts on a layer of impenetrability while wearing the suit. I think that over next two issues this story will delve deeper into what makes Batman tick than any other book before. Deadman is more of a ‘pest,’ according to Constantine. He will randomly show up whenever and inhabit someone’s body for a second, just to talk. I hope there is more of him in this book, as he was a highlight of this issue. Zatanna isn’t a world class magician like she usually is; instead, she’s just a street performer playing card tricks on people, which is a cool take on her character fits the world Azzarello has created. This issue also shows that Thomas and Martha may not have had a perfect marriage after all, which is definitely a nice change-up from the usual role model couple we tend to see.

Lee Bermejo’s gritty art provided a perfect take on the occult, with Gotham’s very gothic design shining behind the characters. Batman’s costume was absolutely gorgeous as well. The way the layers overlapped with the bat symbol clasping them down, virtually the same design as Bermejo did in Batman: Noel, which is fine by me because I absolutely loved that costume. Deadman and Zatanna’s redesigns were also awesome, with Deadman’s suit looking more like it is a muscular texture rather than just a costume. And he was m0re of a wisp of smoke with features than being in a physical form, which was neat. Zatanna’s punk rock outfit was a surprising, yet welcome, change to her usual magician’s outfit. I think it made her have a spunky-vibe.

This was a great start to both Batman: Damned and DC’s new Black Label. The writing was stellar and the art was gorgeous, which made this a near perfect comic book. My only complaint is that the placement and coloring of Constantine’s narration made it hard to read in some panels. This is definitely one of DC’s best books in a long time.