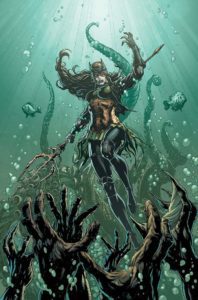 “The Rime of the Ancient Mariner”

At the bottom of the sea a presence moves towards the surface. As she moves closer, we are told of the personal loss she has suffered and the world that she has lost as well. The closer the surface gets, that sadness turns to rage at the approaching light and when she breaks through from the sea, she releases her fury on Aquaman’s home of Amnesty Bay. Releasing enough water to flood the entire town, Bryce Wayne waits for a challenge. The challenge comes in the form of Aquaman and Mera. As she and Arthur continue to battle, she recalls her world Earth 11. 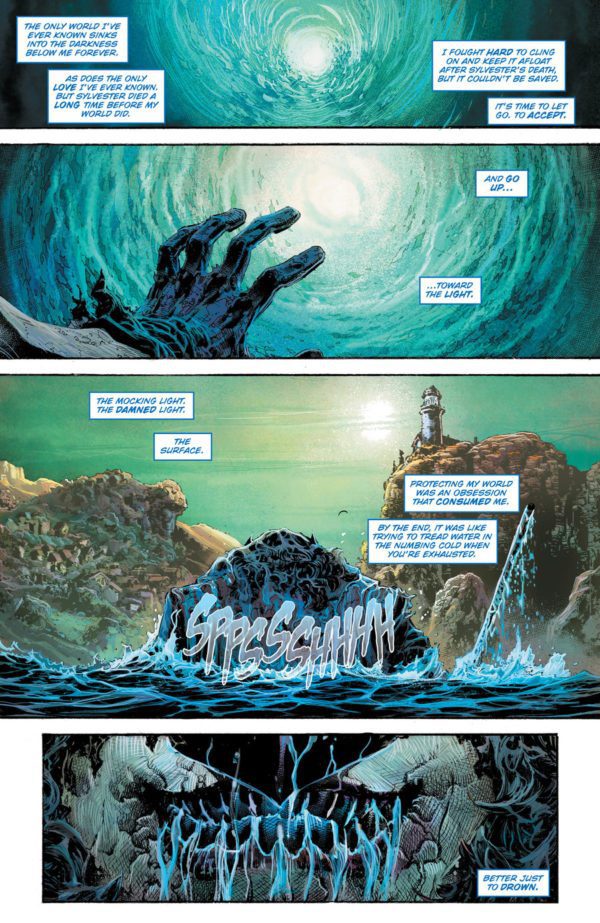 On Earth 11, we witness the fury of Bryce’s war against the Atlantean invaders led by a female Queen of Atlantis (on Earth 11, gender roles are reversed). Not trusting metas after the tragic death of her love, Bryce takes on the mantle of the bat and attacks the Atlantean army. The lengths she goes to achieve victory and the sacrifices she makes in pursuit of that goal are what make her formidable as well as tragic. When the Batman who Laughs reaches out to her, she sees the ultimate end of her world and her lack of trust pushes her to seek her own brand of justice on a new world.

I liked this story. As a one-shot, it did a great job of introducing me to the character and setting up the conflict to come. Abnett has done a really good job of crafting a story that is both tragic and terrifying. My only misgiving is that many of the moments that are described in the story would have better served it if they were shown visually. Leaving things to the imagination of the reader is fine, but the amount of description given on the page would have been enhanced by seeing a panel or two showing those events. I don’t need to see the death of Sylvester, but the aftermath would have meant more than reading the words. The art is really well done and I would have liked to have seen more of it in those moments.