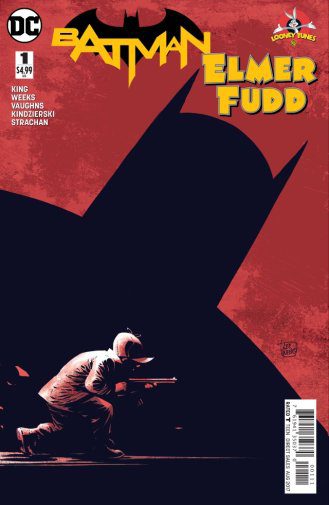 Elmer Fudd is tracking down the man who killed his girlfriend, but his search leads him straight to Batman. Two unlikely foes face off in this noir style crossover.

I’ll start off by saying that the DC/Looney Toons crossovers have been better than I expected, but not mind-blowing. That changed with Batman/Elmer Fudd because it was fantastic. Unlike the previous special one-shots, this one features multiple Looney Toons cameos. Where Wonder Woman/Tazmanian Devil set the bar for integrating the cartoon characters into DC Universe lore, this issue has skyrocketed past that with Looney Toons being interpreted as seedy Gotham City criminals.

Tom King’s decision to give this a noir vibe was on the money. Even though we are getting human versions of animal characters, it would still be easy to not take any of the Looney Toons seriously, but because of the dark and dreary style of the story, you have to. Even the conversation between Buggs and Elmer was intense. The story revolves around Elmer Fudd tracking down the killer of his girlfriend Silver St. Cloud. It leads him to a hitman named Buggs “The Bunny,” who says he’s been payed off by Bruce Wayne, a man Silver loves. The pacing was great and I kept wondering which character would turn up next.

I really loved the art team in this issue, the pencils and colors fit the tone of the story perfectly. The Loony Toons weren’t done cartoonishly, but you could still tell which character they were supposed to be, it’s impressive. Lee Weeks’ Batman had a retro look to him that was a welcomed sight. I like the Greg Capullo’s version of the costume that everyone is using,

but nothing beats the classic look in my opinion. I’m glad they let them use the older costume for this story, it works.

Much like the previous specials, the backup story is done in a cartoon style. It was a little silly and predictable, but it had a really good payoff. The Martian short story is still my favorite of the ones I have read. I do like that they throw canon and reality out the window and play things out like a Looney Toons cartoon actually would do. The shtick used is old true, but it is a classic.

All-around, this was a great issue that is a must read for any fan of the two properties. I don’t think you could ask for anything better from these crossovers. I’m not sure if it’s the creative team or editorial team’s idea to pack this issue with so much, but they really treated Batman special. None of the other issues had nearly as many characters or references. It really made this comic book feel special.