WB entertainment & DC animation brings a new style of Batman in this anime version of the caped crusader. The bat family is transported back to feudal Japan to stop the samurai wielding joker and Batmans greatest antagonists. Will Batman be able to figure out a way to stop the Joker and return home? Or will this be the Batmans final resting place?

This movie is outstanding in what it has accomplished. I do love anime and was waiting for its release. It’s no easy feat creating an anime version of an already established character and their world. Director Juneau Misuzaki and the team behind this movie have done incredibly well to do so. Its action takes place in familiar places such as an Arkham Asylum and even a Japanese “bat-cave” is present in feudal Japan. 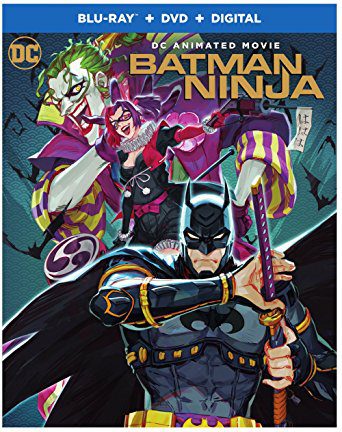 The pace is fast and frantic as those familiar with anime will be used to. Those not, it may be a lot to take in how wild this movie is. Each member of the bat family is designed brilliantly, as are the villains, to fit the look of feudal Japan. Voice acting here is superb from both Roger Craig Smith and Tara Strong as well as it’s sometimes eccentric dialogue. It’s a wild ride and has some very well animated fight scenes and a climax to the movie that will blow you away. This movie is worth the watch even if you’re unsure about anime to behold batman’s world designed to resemble Japan. Fully enjoyed this movie and highly recommend it.