Batman: Prelude to the wedding – Batgirl vs The Riddler #1 REVIEW

Batman: Prelude to the wedding – Batgirl vs The Riddler #1
DC Comics

Its the eve of the wedding for Gotham’s dark power couple as Batgirl is drawn into one of The Riddlers twisted games. It’s a race against time to solve the madman’s many puzzles and save the unfortunate victims caught in his traps. The game has begun and only Batgirl can defeat him. Will Barbara riddle her way out of Nygmas devious grasp? Or will she wind up puzzled as Riddlers plus one?

The premise to this his prelude is simple yet powerful. The Riddler has several hostages in his traps scattered across Burnside. The opening panels see Batgirl receiving instructions via a walkman that she listens to throughout this issue. The tapes contain Riddlers instructions in the form of Riddles to find the locations of his victims. Each tape brings her closer to saving each hostage and closer to stopping Nygma. In true Batgirl form the issue manages to inject moments of her personal life early on and how she juggles duel identities. Early on her quest to stop Riddler we see her discussing her past relationships with friend Dinah before the action kicks off. This is also Batgirl scoring out the area which is referenced later on. A good example here of Barbara’s being able to balance both roles I admired by writer Tim  Seeley. She cuts the conversation short at the right time in quite an ingeniously written way that is referred to at the end of his the issue I won’t spoil.

READ THIS
Batman: Curse of the White Knight #5 (REVIEW)

The issue was very reminiscent of a horror movie similar to the movie SAW in where victims are placed in various games that have to be solved for their freedom. Only here it’s The Riddlers Riddles and puzzles instead of moral dilemmas Batgirl has to solve. It makes you feel like the race is on and it’s incredibly fun to try to work out each riddle with each tape she has. You feel a part of the game and that you experiencing the panic of the situation she is in. Works really well in building the suspense and keeping you engaged throughout.

I love the artwork by Minkyu Jung and the Riddlers design here is one of my favorites for him. He looks cool and hip but still the same narcissistic Riddler we all love to hate. It’s a fast-paced issue, an incredibly fun read and a great addition to the preludes leading up to the wedding. The end panels also have a surprise waiting for you which I won’t ruin. In keeping with the issue’s theme – I’ll leave it a Mystery.

Batman: Prelude to the wedding - Batgirl vs The Riddler #1 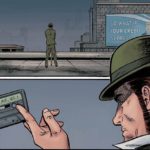