I like the decision to have this story in the third person. Leave so much room for speculation about what’s running through Batman’s head.

Can you imagine the idea of Batman with Superman powers though? Clearly, Superman trusts Batman fully and wholeheartedly in this reality. Because everyone knows if you give Batman Superman’s powers, there’s no being who could hang with Bruce Wayne.

This was also the shortest story in Batman Secret Files #1, but was probably my favorite. The way Tom King wrote this, you really get the sense Batman is on the brink of using the Platinum Kryptonite. We’ve all been tempted to “cheat” in some shape or form; Bruce Wayne is no different. And I don’t think anyone would blame him for getting an extra edge. But the idea of him possessing Superman’s powers is as much unsettling as it is exciting — both for Batman and pretty much anyone else in that world.

“The Nature of Fear”
Written by: Ram V
Art by: Jorge Fornes
Colors by: Matt Wilson
Letters by: Steve Wands

I’m starting to wonder if writers who include Scarecrow in a story are themselves hallucinated. Because it doesn’t matter who’s writing the story, it’s always rattling by the end. Well done by Ram V. And I really appreciate how there’s no grey area at the end of the story: Officer Fielding’s mind is warped — maybe permanently.

The big focus in this section of Batman Secret Files #1: it’s not the tools, it’s the people who use them.

Technology catches a bad rap, especially when it’s used in such a negative manner. We have to be aware of the potential, both good a bad, of any piece of technology, but it’s always more about who’s using the tech.

This is the only story where Batman narrates. Makes sense, since he’s the only one in the story — besides the deer he kills.

It was interesting to get a peek at how Batman thinks when he’s in a foreign setting and has zero direction. Batman broke down little things, like the sound he heard outside where he said to himself, “I can’t visualize what I’m hearing.” Pretty amazing how he tries to use every little thing to his advantage.

No shock Batman’s alone time brought his self-loathing nature to the forefront, too.

Bobo and Batman. Who knew Detective Chimp could be such a fun foil to Batman. His best back-and-forth with Batman in the story:

Batman: “You don’t have a crime lab?”

Bobo: “I have a magnifying glass and a hat.”

Really makes you wonder, who really is the better detective?

Looking at the entire issue as a whole: I really like the idea, and everything was well executed. Some stories were superior to others, but it was an all-around fun read. 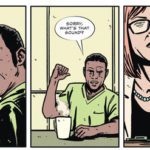