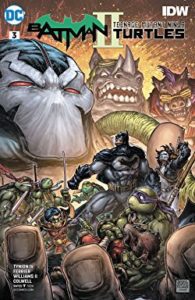 Action, fun, excitement, and pizza is all we ever need when it comes to the Ninja Turtles.Their adventure with Batman and Robin continues to escalate with the challenges that have been brought to them by the end of this issue, but the ride leading up to that point is an enjoyable ride that fans will love sinking their teeth in. I am someone that person has had a rather big dislike for Damian as Robin but I have found him more manageable in this crossover. When he is being more of a kid, it seems to push him outside of his comfort zone, which is actually what makes him more likable to me. So him losing in a video game to Michelangelo had me laughing pretty hard because I think many of us have seen that one person who gets pretty upset over losing in a video game, especially when you’re just having fun with your friends.

Have you seen this:
The Mandalorian Chapter 10 Review

The majority of the action in the issue is just a sparring match between Raphael and Damian. I get that Damian is supposed to be a great fighter, but I wasn’t too 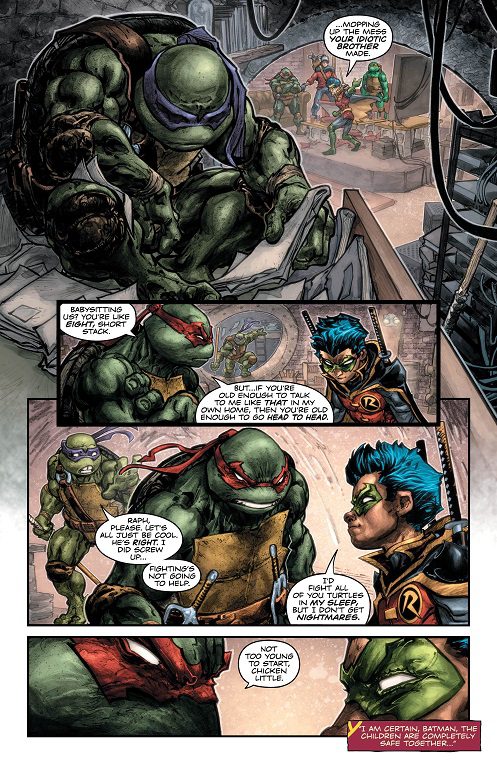 fond of him seemingly being on par with Raphael. I have always felt like Damian’s strength is obscurely high for a human kid. Other than that we get a small step of development for Donatello and I hope that this is the last we hear of him doubting his place on the team anymore. Some of my favorite parts in this issue though are the panels with Beebop and Rocksteady. These two have always been a favorite of mine when it comes to villains, and seeing what happens to them here made me smile big and laugh as they continue to just let themselves be used for more experiments by whoever their boss is. Speaking of their boss, Bane continues to prove his worthwhile as an adversary as he pushes the foot clan in a new direction under his rule. Bane is my favorite villain from the Batman comics and seeing what he would do to an army of fighters is great. Every time he speaks, he does it with conviction and aggression as he fights for total control. When he comes face to face with our hero teams at the end, he does so in full force and this kind of a hang is great because of the anticipation it leaves for the fight to start on the next issue.

Donatello’s development only took one real small step and I’m sure we’ll see a bit more of it later. Only one real fight happened among the teams. What really made the issue though to me is Bane and what he has prepared for everyone to see right before our next brawl.