Batman: Underneath The Cowl (Editorial)

The Batman, The Dark Knight, The Caped Crusader, Bruce Wayne is known for his many nicknames as his alter ego is the most renowned Superhero of all time. Batman has been a large part of pop culture for 80 years and has been in constant favor with all different generations. What The Batman represents has resonated with audiences for over 80 years. The Batman has had many major distinctions in his characters from the 30’s-60’s in which he was campy and quirky like the ‘66 television show. In the 70’s The Caped Crusader had a renaissance with new, darker stories that captivated new audiences. In the early 90’s a slew of successful Batman films brought the character into the public eye in which his popularity grew exponentially as well as the character becoming The Batman we see today. Batman has been adapted in a slew of different films, television series, games and novels all of which add something new to the iconic nature of the Bat

Batman is a representation of rebuilding and re-purposing trauma into something great. Bruce Wayne is born into a wealthy family which was taken from him and is the catalyst for his journey as Batman. Bruce chooses to dedicate his massive fortune and skills into cleaning up the streets with a rough brand of Justice. Batman is justice incarnate. Bruce has all the foundation for being a generic aristocratic, billionaire playboy and yet he chooses to devote the entirety of his life and fortune in the pursuit of justice. Bruce’s decision to be Batman at the cost of his personal life showcases a great deal about his character. Batman is all consuming and the cost of Batman is one that no normal human could bear. This is why Batman is able to stand among all-powerful aliens, speedsters, intergalactic policemen, and literal gods and goddesses and still be the most interesting character. The Batman’s compelling nature is far different than any other hero because he’s just a man.

Bruce Wayne is human. Just a normal human, no gimmicks or written-in gags. All of Batman’s abilities and power come from Bruce’s dedication to the pursuit of Justice, his massive wealth is a crutch for his character but he is most definitely not reliant on his wealth for a “power” What sets Batman aside from all other heroes is he has no powers, none at all, there’s no distinction between Bruce Wayne and your generic Joe walking down the street. However, his devotion to Justice is similar to other heroes like Spider-Man in which every time he chooses to don the cape and cowl it costs him something personally. Bruce chooses time and time to actively give up any sort of normal life in favor of his pursuit of Justice. On a personal level, the most compelling part of The Dark Knight to me is that he is just a human, all his “powers” and abilities come from his sheer drive and determination to become more than a man. Bruce Wayne is as much a man as any one person, he wasn’t bit by a radioactive spider or sent from another planet, he’s just a man with indomitable will and endless amounts of drive

The notorious “no-kill rule” is something that separates our big bad Bat aside from any other hero. He isn’t like other heroes in which whether he kills or not is a “just don’t ask” type deal, Bruce’s no kill rule and his value for  human life is far more outspoken and Bruce’s endless attempts to preserve human life is a golden standard. At the cost of his own life, Bruce Wayne would time and time again give his own life in the preservation of human life. Batman will never kill because if he does he is no better than the criminals he fights to stop. What’s always stuck me on a personal level is the extreme lengths Bruce Wayne will go to protect ALL life.  Batman’s 1 rule, the one rule he WILL NEVER cross is the taking of a life. What’s so compelling about the Batman and his adventures is not will he stop the villain, but the how, how will Bruce Wayne find a way to end the problem at hand without taking a life. The job of the Batman would be 1000 times easier if Bruce was willing to kill but he’s not because should he kill criminals, their children and family see the Batman in the same way Bruce see’s the mugger who killed his family.

Batman actively represents something far deeper and psychological than any other hero. Many theory’s allude that Bruce Wayne is sick in a psych ward in which Batman is his identity he adopts and each villain represents his individual personality. The Penguin is a representation of Bruce’s aristocratic nature, The Riddler is his OCD and needs to win, Mr. Freeze is his desperation, Joker is his insanity, and Scarecrow is his fears. (Among many others) Batman is the ego Bruce chooses to adopt to cope with the murder of his parents in which when he dons the mask, he becomes Justice incarnate and he becomes the fear that stops criminals from considering killing another Wayne again.  All of Bruce’s adventures could be nothing more than the figment of his imagination. Batman could also be mentally ill will a plethora of sickness that require him to dress as a Bat and beat on the guilty. Bruce is evidently sick with something, maybe all of the above and yet, in this he chooses to do what he sees fit to clean the streets of Gotham. Time and time again citizen’s can count on the Dark Knight to rise and end the problem at hand. Whether the Bat’s adventures are righteous one man crusade or a ploy for a rich man to beat on criminals is up to each individual fan to decide. Each and every fan has a different, “perfect” Dark Knight for themselves to see in Batman.

Batman has been sculpted in a multitude of ways during his 81 year long existence as he’s been changed to appeal to different generations and the iconic nature that is Batman is going nowhere. Batman’s iconic nature will never fade but is ever changing as over his 81 year long life span his character has been changed and warped and re sculpted under the logo of the Bat. From Campy and fun to a serious detective to active member of the Justice League, the Batman’s reign is far from over. 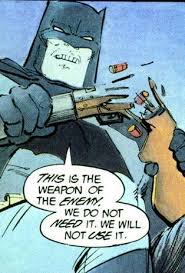 Batman
Add your voice!Join the conversation on Discord...
Join Our Discord