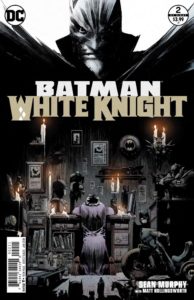 The Joker is no more, and Jack Napier points his finger at the true villains of Gotham, Batman and the Gotham City elite.

After finishing this second issue of Batman: White Knight, I couldn’t help but wonder why no one has thought of doing a story like this before. The Joker has done good things before, but he’s never been rehabilitated. Not a single punch was thrown, yet this issue was just as riveting as any other Batman comic I’ve read this month.

Though White Knight was said to not be “SJW Batman,” the use of Internet colloquialisms and protest imagery make it difficult to gauge what the meaning behind this mini-series is, for now at least. There is a lot to chew on concerning Batman’s use of violence and how the criminal justice system operates, but with Jack Napier, as the voice of reason you can’t help but feel cynical. When the face of villainy takes the form of a self-righteous, hypocritical, yet well-intentioned Joker, I’m left wondering if this mini-series is a sort of critique on internet do-gooders. Maybe Napier’s form of vigilantism wasn’t meant to be taken as hypocritical even after criticizing Batman. He may have taken justice into his own hands when controlling the other Gotham rogues, but he does so in a nonviolent way, by creating his own hive mind. With that said, Jack Napier’s journey is just beginning, so who knows where it will end. 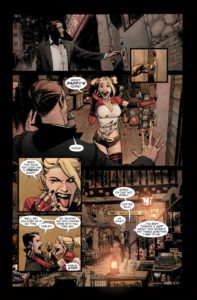 Sean Murphy’s version of Gotham City and its rogues is fantastic. The character designs have a fresh but familiar feel to them. Bane has a Dia De Los Muertos vibe to him, which is perfect for this time of year. The best thing about Murphy’s art is seeing how much effort goes into the background of each panel. He is just an incredibly talented artist.

There were a few missteps, like the multiple Harley’s or the Mr. Freeze sequence which felt out of place. They weren’t bad, but I didn’t feel like they were needed. Though Freeze is obviously a thread that will come into play later and Harleen Quinzel may be used to give the character closure.

I had already loved the concept and the execution of this story, but the Batman: The Animated Series influence just makes it feel that much more special. As I said before, the style of writing and artwork make Batman: White Knight feel timeless like this mini could have been released years ago or sometime in the future. It’s just a damn good Batman/Joker story.