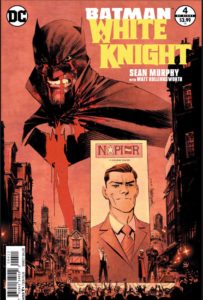 Written by, Art by and Covers by: Sean Murphy
Colors/ Cover Colors by: Matt Hollingsworth

After reading issue 4 of this now 8 issue mini-series, it continues to be my favorite comic of the year, and now into the new year (Release date 1/3/2018). Gotham is starting to prove Napier right. Batman seems to be one who’s not taking his “bait”.

White Knight is most definitely a very layered comic. Each one as slowly lifted layer by layer. To me, that’s what most of the greater comics have done so it continues to keep you in suspense while answering just enough questions that you understand it. In this issue, we start to see what Napier’s motives really are. Gordon sees how corrupt Gotham and the GCPD really are and starts listening to his ideas. He has a way bigger and well-orchestrated plan than I could ever expect. Well, he WAS the Joker at one time. We see his mind control device again and what else it can do, but someone’s blocking the signal. Enter The “other” Harley Quinn. Her identity is finally revealed and she gives herself her own title as The Joker. I am now seeing almost for sure that she’s not the actual bad guy. She understands that Joker may be controlled by Harley. That’s just my take. Gordon is the only member of the GCDP who believes Napier can change things. His plans and ideas start sinking in. He’s being played. There are certain things that would help save Gotham, but it’s clear his motives are directed at Batman and having total control of the city. Batman is dealing with a serious loss. Can he completely snap out of it in time?

So many questions were answered, yet I have so many more. This title has been perfection. Each issue has the perfect continuation from the previous. The dialogue isn’t scattered, it flows flawlessly. The art is never disappointing. I’m in love with Sean Murphy’s style of these characters. To me, that really is what Joker would look as the everyday American Citizen, yet we see peeks of that sinister smile. Batman looks like he’s going mad at times. You can see the actual anger and heartache in his expressions. I can’t say enough how’s much I love this comic and I was excited to read there will be another issue!