Battle Chasers: Nightwar has been released on other platforms for a while now but it’s finally here on the Nintendo Switch. This turn base role playing game is developed by Airship Syndicate which was made possible due to their Kickstarter campaign for the game back in 2015. The adventure starts off as your party of five members are off to find Gully’s father who was given a pair of magical gauntlets. Joining her are Garrison the swordsman, Calibretto the war golem. Red Monika who is the Rogue of the group, and Knoaln the old mage. Due to an attack while on your airship though, your group crash land on an island and are separated. Throughout the adventure you’ll make your way to find your friends, explore dungeons, and discover an evil that has been causing havoc on the island. 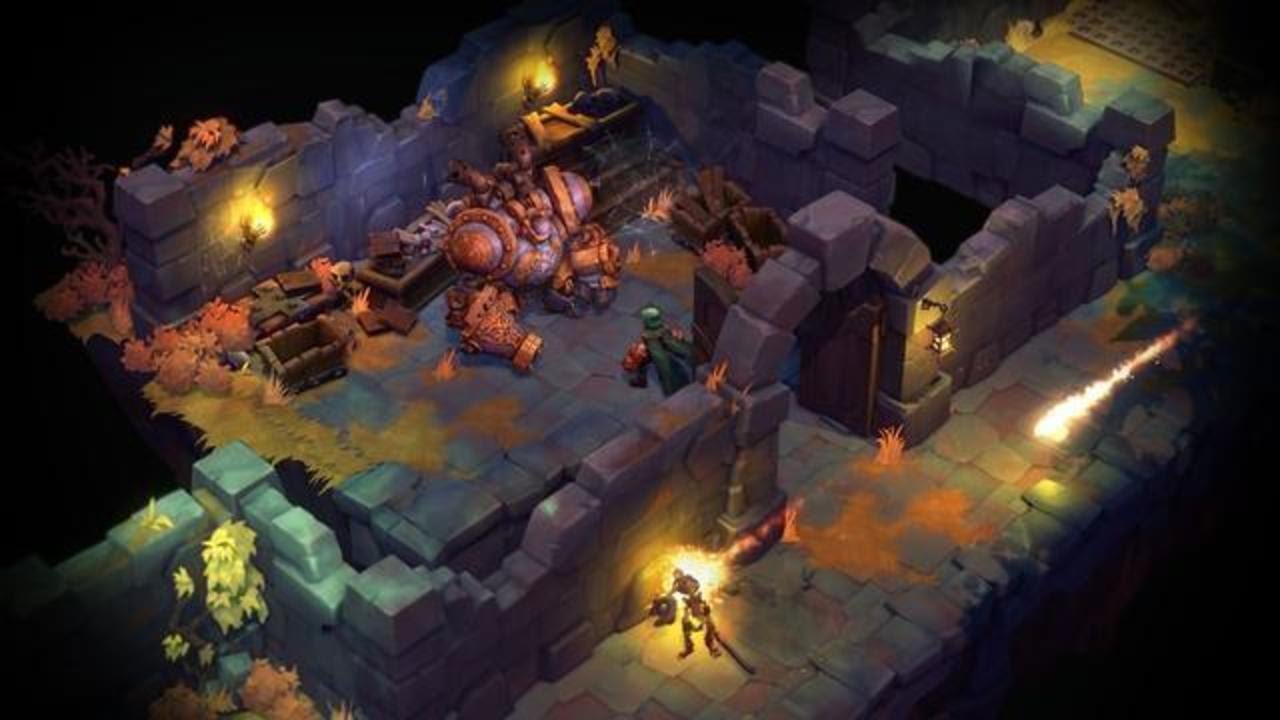 Any fans of the older style RPG’s from likes of the classic Japanese RPG’s that were all over on the Playstation 1 will recognize many things in this. The camera is primarily in an isometric angle and only changes a bit when going into a battle. You explore the overworld on linear paths on the map but they do branch out a bit that will reward any explorer. Your party can only consist of 3 members and can only be changed at the towns Inn. When leveling up other members, any one not in use will not level up. When traversing a dungeon, you’ll be able to use certain abilities that can heal your party or add status effects when going into a battle. Battles start when walking into an enemy and if more than one are grouped in when touching the enemy before the fight. Those enemies will join in and if there are enough, you’ll even have to fight them in separate waves. Battles are done in the classic turn base style. Your party and the enemy’s portrait are laid out on the screen showing who will attack next depending on what action you take. I haven’t seen this sort of thing myself since Final Fantasy X and have always enjoyed the bit of strategy that can get involved with this type of system. You’ll be able to either attack, defend, heal, and use items in each fight. After each action, a meter will build up your Burst Attack, which is a super ability unique to each character. Certain abilities will also add status effects such as stun or bleed to damage the enemy or have them wait another turn. Visuals are a real treat in this game with the 2D art overworld landscapes, and the characters and dungeons are done with very colorful 3D models. In some cases the 2D and 3D models get mixed up that make a nice blend of certain scenes and actions in the game.

Some of the downfalls specifically with this version though are that you will experience some frame drops from time to time. Mainly when you’re crawling around different dungeons. It’s nothing too serious but it is noticeable if you’re paying attention that sort of thing and I saw no difference in performance between handheld mode or docked. The games difficulty curve can get a bit obnoxious too. Some fights you will feel under leveled and will lead you wanting to grind a bit. You also can’t use any healing spells to your party when not in a battle except for your Golems heal ability when he’s in your party in a dungeon. So if you run out of healing items, you may find yourself heading back to the main town to grab some more. Thankfully this does not reset the dungeon so when you go back everything will be as you left it. After completing a dungeon though, you’ll be able to go back and try again at a higher difficulty for better treasure. Along with the main story, there are enough side quests and hunts to go on that will keep you occupied if at any point you decide to veer off from the main path and want to take care of other things.

Battle Chasers: Nightwar does so many things right with only some minor gripes with the party leveling system, difficulty spikes, and the random loading when going into fights. So much of the game is polished though with a great cast of fun characters, some fun voice over work done with them, and a simple battle system. The game can really pull you in and you’ll easily lose hours upon playing it not realizing how much has gone by. Any RPG fans should definitely look into Battle Chaser: Nightwar, and of course. Being able to play on the Switch makes it even better to be able to continue the adventure anywhere you go.