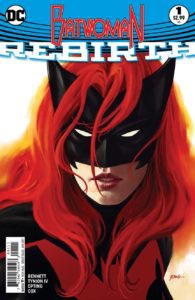 In the ten years since Kate Kane’s debut as Batwoman, her origin has been told and retold a number of times. Through her initial introduction, then in her leading role in Detective Comics, and then again in her own self-titled series, Batwoman’s origin has been told, expanded upon, and filtered to fit each new series. Throughout it all, Kate Kane and Batwoman remained a strong and engaging character. Batwoman: Rebirth continues this narrative of Kate’s strength and determination to create a successful introduction for readers.

Kate Kane’s Batwoman was a central figure in Detective Comics since DC’s Rebirth event started in 2016. She trained a group a less experienced vigilantes in the Batman universe. One of the initial arcs found Kate’s father, who was previously her confidant and trainer, turn against Batman and his team. Over the last few months, issues #948 and #949, writers James Tynion IV and Marguerite Bennett had Batwoman and Batman going up against someone from Kate’s father secret society called The Colony. Issue #949 ended with a send off and a new mission for Batwoman and Kate.

Batwoman:Rebirth does not directly pick up from this new mission, instead writers Marguerite Bennett and James Tynion IV use this issue to glide readers back into Kate’s world.  The beauty of many of the Rebirth 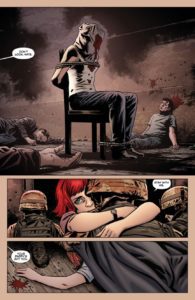 titles is that they are inviting to new and lapsed readers. Kate Kane as Batwoman has received a number of mainstream press stories over the last decade and there are many readers who may not be current on the character. Bennett and Tynion successfully provide a feeling for who this character is and what she has been up to without the issue feeling like a note for note origin story.

The final panel is a real treat for readers who have followed the character since Rebirth. The imagery hints at a few twists along Kate’s path and a new role. Regardless if this teaser is a real twist or simply an undercover operation, the narrative ride to get there should be enjoyable. Speaking of panels, Batwoman has frequently held an artistic standard and quality in the art. Former artist on the series J.H. Williams III beautiful panels invoked a painted aesthetic. Here art is handled by Steve Epting who finds his own style that fits the painted history of the character. Even for readers familiar with the narrative, Epting’s art and Jeromy Cox’s colors craft a beautiful issue.

The creative team of Bennett, Tynion, Epting, and Cox crafts an artistic issue that invites new and former readers back to the character, while teasing just enough for fans to get excited about. Kate Kane remains a powerful character who is often easier to identify with than Bruce Wayne. Her tragic history, strong willed resolve, and personality make Kate one of the most engaging characters in Gotham. Readers have a lot to look forward to with this series.