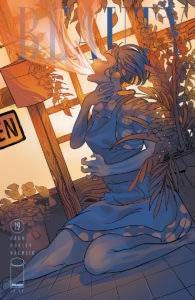 Have you ever had your eyes on a series and were always interested in it just based on the cover? That’s how I was every time I would see Beauty at my local comic book store when I would pick up my other books. I finally decided to just dive in on the new issue without doing any research on what it was about or even reading the prior issues. I have to say that it is certainly different from a lot of what I’ve been reading lately.

The issue surrounds a reporter/podcaster named Cooper Mack. He goes around asking people that have used this thing called “Beauty” to seemingly enhance their physical abilities and looks. We do meet other characters that talk about Beauty as a disease and want to cure it and I greatly enjoyed the different viewpoints. In This issue, Haun & Hurley showcased people that have used and haven’t used Beauty. It was giving off this great sense of a political standing on how people should take advantage of what they have available to them or not depend on something like this at all and work hard for what they want. This one interview in particular gave me a good laugh on how even though one person used it to get better physically in keeping up in a sport, he still lacked the skills to perform as well as the other players. This was one of the standout moments for me in the issue as it can be compared to real life situations such as using drugs to enhance your body in certain areas to become “seemingly” better. Then we see people that are in high places from the company that provides Beauty and we get see how dark things are in their world and get brief hints on how far they will go to keep their secrets hidden and other people quiet so that they can continue to make money off this wonder drug. 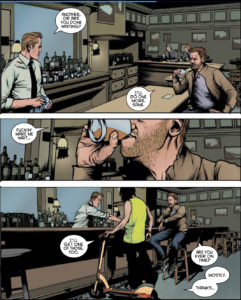 Beauty seems to be an interesting world I want to read more about. As I continued on through the issue, I was getting more and more interested in Cooper’s investigation through his interviews and findings, seeing the higher ups of the “villainous” company that are working to keep their secrets, and I wanted to know more about Beauty and how it works with people and what are the negative effects of it. I’m glad to have picked up this issue which has me now more than ever interested to go back and pick it up from the beginning and see what this Beauty is all about.

Beauty comics Image Comics
Are you an Insider?News, reviews, & updates are just the beginning.